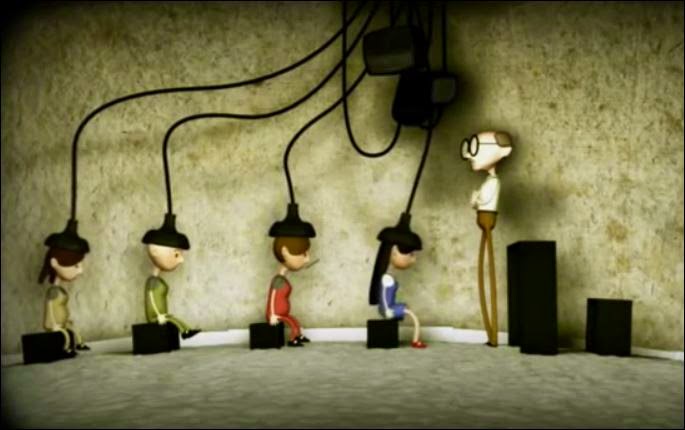 Once upon a time, in medieval universities, new students enrolled in the Trivium. It was the foundation curriculum. It was required. Its parts were: grammar, logic, and rhetoric.

Grammar: the interior construction of language.

Logic: the valid and invalid connections in the course of a formal argument; the method of proper reasoning; the deductive links in a chain, at the end of which appears a conclusion.

Rhetoric: oral and written presentation; the use of language to make a case; the capacity to persuade, even in the face of counter-argument.

Today, the subject matter of the Trivium is not only downplayed. It has been shattered.

This article focuses on the death of logic in schools.

When the intensive handling of ideas is seen as a laughable goal for education, indoctrination is plugged in as the only alternative.

The mind of the student shifts from being an active force to being a container.

The destruction of logic perverts rational thought at its core and inserts ideology masked as insight.

The actual meaning of an idea is firmly placed on the back burner. Instead? Praise or attack the people who forward ideas.

This strategy has gained great prominence.

“The revered Founders of the Republic? Shysters, con men, slaveholders, monopolists who saw rebellion from England as the way to win greater power for themselves, at the expense of everyone else living on American soil.”

Therefore, the argument continues, and this is crucial, the Founders’ IDEAS, as expressed in the Declaration and the Constitution, were rotten to the core. The ideas can be dismissed out of hand as coming from “a bad source.”

Ideas no longer need to be judged on their sense, merit, and alignment with basic principles. Nor are they judged by their position in a well-formed argument. All that is out. Now, you only have to “look to the source” and make ALL your decisions based on “who these people really were who expressed the ideas.”

And since that’s the case, learning to think or reason is unnecessary.