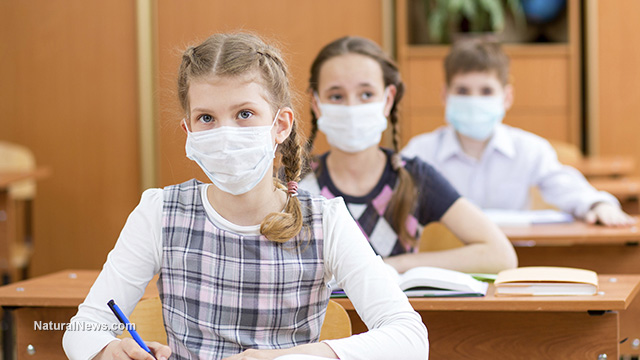 Infectious disease-paranoid parents readily deliver their argument that anytime there is a measles, chicken pox or flu outbreak at a school, all of the non-vaccinated children are the culprits and need be banished from school until they get their inoculations. Ironically, it’s the vaccinated children who are the prime “carriers” or “shedders” of live viruses that they’ve been injected with recently, so who should we really avoid?

It is a scientific fact that any person injected with a live virus, even if it’s weakened or “inactive” due to toxic formaldehyde, can shed that virus via saliva or mucus to any person whether they are inoculated or not. This is even true when the inoculated “shedder” doesn’t come down with the disease or those particular strains of influenza themselves. When you also consider the fact that injecting mercury (thimerosal), aluminum, MSG and formaldehyde weakens the immune system by unnaturally shocking it into “fight or flight” mode, it turns out that the vaccinated children are even more vulnerable to their vaccinated counterparts who are carrying around and shedding the live viruses with which they themselves were injected.

To make matters worse, the vaccine manufacturers are immune to vaccine violence damage control because they have their own court of law with their own judges, who are paid shills of the industry. They also have a slush fund to keep the parents quiet whose children are suffering from autism spectrum disorder, brain damage, central nervous system damage and other chemical violence outcomes from the typical CDC nightmarish vaccine schedule. In other words, if every child stayed home from school for two weeks after each live virus inoculation, they would miss so much school that they could never graduate any grade, according to the CDC recommended vaccine schedule that is currently in place.

The CDC counts on the public NOT reading, synthesizing and utilizing the information they publish on their website, and most Americans have no clue that the most critical information is not on television or in the newspapers. On page 5 of the 14-page PDF on the CDC website, the public is warned:

Fecal shedding of vaccine virus was evaluated in a subset of persons enrolled in the phase III trials. Vaccine virus was shed by 9% of 360 infants after dose 1, but none of 249 and 385 infants after doses 2 and 3, respectively. Shedding was observed as early as 1 day and as late as 15 days after a dose. The potential for transmission of vaccine virus was not assessed in trials. In a post-licensure evaluation in the United States, stool samples were collected from infants for 9 days following the first dose. Rotavirus antigen was detected in stool of 21% of 103 infants, as early as day 3 post vaccination and as late as day 9.

Let’s just repeat that to ourselves one time: shedding was observed as early as one day and as late as 15 days after a dose, and the potential for transmission of the vaccine virus was not assessed in trials.

In 1955, the Polio virus is FALSELY declared the “miracle vaccine of the century”

The year is 1955 and the Polio virus inoculation is declared “safe, potent and efficient” and released as the new “miracle vaccine of the century” all over the world. Immediately following the proclaimed prevention medicine for Polio, the Foundation for Infantile Paralysis ran press releases in all forms of available media that Dr. Jonas Salk invented and tested this miracle drug.

The foundation called for the manufacture of enough vaccines to inoculate more than nine million children and pregnant women. American Press and Radio declared victory for Salk and the “greatest medical discovery of the century.” Then came disastrous news: inoculated children began contracting polio. More and more cases were being reported by the day, including satellite cases where parents and siblings of inoculated children were contracting the disease, even when the inoculated child was not suffering. This was the “carrier” and “shedding” effect that science would later discover happens with measles, mumps and polio. The vaccinated children became the new carriers, and Western Medicine would blame anything else in the name of saving Big Pharma and the new reign of invasive, carcinogenic, immune-compromising and neurologically-impairing medicine.

The Disneyland outbreaks of the measles spread the same way: from shedders.

The Swine flu epidemic spread the same way: from shedders.

Vaccinated Americans are therefore incurring weakened immunity from the toxins in today’s vaccines and are more susceptible to catching live viruses from the shedders, “the herd” with which they surround themselves, at schools and at work. “Herd immunity” is a hoax and always has been. This is a public service message.