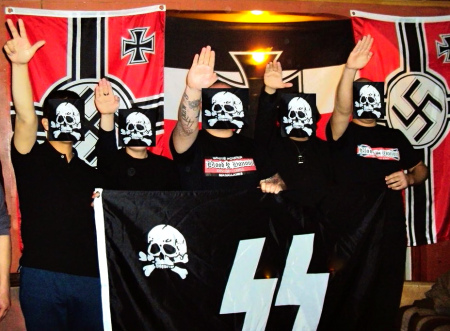 Self-appointed prime minister of Ukraine, Arseniy Yatsenyuk of the “Fatherland Party,” referred to Russians as “subhuman,” echoing the racist vitriol of Nazism Yatsenyuk and others in his regime subscribe to. It was a violent, armed coup spearheaded by Neo-Nazi militants that placed Yatsenyuk into power in the first place, along with the Neo-Nazi political front Svoboda, and paved the way for fraudulent elections that predictably yielded a pro-US-EU client regime.

Yatsenyuk made his comments amid ongoing fighting in the east of Ukraine, where Kiev is waging war upon fellow Ukrainians, shelling and bombing cities in provinces that refuse to recognize the regime’s seizure of power during late 2013 – early 2014. After a significant loss of life during one of Kiev’s many ill-conceived military operations, Yatsenyuk stated:

They lost their lives because they defended men and women, children and the elderly who found themselves in a situation facing a threat to be killed by invaders and sponsored by them subhumans. First, we will commemorate the heroes by wiping out those who killed them and then by cleaning our land from the evil.

From fabricating an “invasion,” to claims of “threatened” lives, to the labeling of Russians as “subhuman,” Yatsenyuk has recited fully the script of Nazism used to justify its various historical crimes against humanity. Kiev’s forces in eastern Ukraine are not fighting an “invasion,” but constitute an invading force themselves, making incursions into eastern Ukraine and holding territory only through unmitigated brutality against local populations clearly collaborating with armed self-defense forces intent on resisting Kiev’s authority.