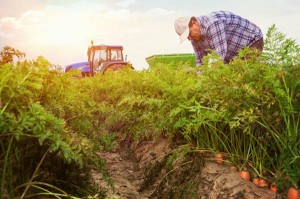 Sustainable, organic farming practices are the best way to feed the future…

Just a few generations ago, in the 1930’s, approximately 45% of Americans lived on farms. This demographic gradually but steadily declined as people migrated to urban centers, and over time, to suburbs. Today, only about 960,000 people claim farming as their principal occupation, which represents less than 1% of the US population.

During the same period of time the US population has more than doubled, and demand for agricultural products has increased accordingly.

It is a testament to human ingenuity that the mechanics of farming has managed to keep pace with an ever-expanding demand even as the number of farms has declined. Farm machinery has become larger, more efficient and more productive. New crop varieties have been developed which resist common pests and diseases while producing larger yields. Chemical fertilizers and pesticides have become increasingly effective, allowing farmers to produce larger crops without the need for additional human labor.

Farmlands have become increasingly dependent on chemical fertilizers which have short-term benefits but contribute to soil depletion over time.

But while today’s large scale food producers continue to profit and consumers see supermarket shelves overflowing with farm products, the unseen costs of our dependence on agribusiness exert a mounting toll. Farmlands have become increasingly dependent on chemical fertilizers which have short-term benefits but contribute to soil depletion over time. Water retention is diminished in non-organic farmland, resulting in erosion of topsoil with chemical residues entering watersheds. We consumers have quietly accepted these changes in farming practices as the cost of feeding a growing nation, and because there seem to be no practical alternatives.

The bottom line for farmers, regardless of the practices used, is income. The 30-year side-by-side Rodale study showed that organic systems were almost three times as profitable as conventional systems. The average net return for the organic systems was $558/acre/ year versus just $190/acre/year for the conventional systems. This figure is skewed because of the higher price organic farmers receive for their produce and meat, but the higher food costs alone cannot account for the difference in profitability. Lower input costs for organic farm systems are credited with significant cost savings for the farmer.

The relatively poor showing of GM crops in the Rodale study echoed a study from the University of Minnesota that found farmers who cultivated GM varieties earned less money over a 14-year period than those who continued to grow non-GM crops.

The Rodale 30-year study found that after a three-year transition period, organic yields equalled conventional yields. Contrary to fears that there are insufficient quantities of organically acceptable fertilizers, the data suggest that leguminous cover crops could fix enough nitrogen to replace the amount of synthetic fertilizer currently in use.

In a review of 286 projects in 57 countries, farmers were found to have increased agricultural productivity by an average of 79%, by adopting “resource-conserving” or ecological agriculture (Pretty et al., 2006).

Organic corn yields were 31 per cent higher than conventional yields in years of drought. These drought yields are remarkable when compared to genetically modified (GM) “drought tolerant” varieties, which showed increases of only 6.7 per cent to 13.3 per cent over conventional (non-drought resistant) varieties.

The effects of climate change bring more uncertainty to farming, with increased drought predicted for some parts of the country. It has become obvious that weather patterns are changing, and looking to the future, food crops will need the resilience to adapt.

While short-term benefits are realized with the use of chemical fertilizers and mechanized production methods, every gardener knows that soil health cannot be compromised in the long term. Eventually, soil-depleting practices take their toll as soil structure weakens, microbial life declines and erosion removes valuable topsoil from farmland.

According to the Environmental Working Group and soil scientists at Iowa State University, America’s “Corn Belt” is losing precious topsoil up to 12 times faster than government estimates.

6. Organic farming keeps toxic chemicals out of the environment

Conventional systems rely heavily on pesticides (herbicides, insecticides, fungicides) many of which are toxic to humans and animals. With more than 17,000 pesticide products (agricultural and non-agricultural) on the market today, the EPA is unable to keep up with adequate safety testing. In fact, the EPA has required testing of less than 1% of chemicals in commerce today.

Many studies link low level exposure of pesticides to human health problems, and chemical residue from pesticides used in farming can be commonly found in air and water samples as well as in the food we eat.

Industrial agriculture has replaced human hands with machines and chemical inputs. According to the EPA, in the last century agricultural labor efficiency increased from 27.5 acres/worker to 740 acres/worker. Joel Salatin, organic farmer and author of best-selling books on sustainable farming, views these statistics as another reason for us to return to our farming roots. “People say our system can’t feed the world, but they’re absolutely wrong,” he says, “Yes, it will take more hands, but we’ve got plenty of them around.”

One important aspect to consumer support of conventional farming practices is the cost of food. Organic produce and meat is higher priced than non-organic counterparts. But, according to Joel Salatin, we get what we pay for. “We spend around 10% of our income on food and some 16% on health care, and it used to be the reverse.”

Our current food production system is in need of repair. We need to promote organic systems which respect the integrity of soil health and sustainable systems. Until recently it was thought that our national and global food needs were too big to be met with natural, organic food production systems. Recent studies confirm, however, that organic farming is the way of the future. We need, both collectively and as individuals, to support the organic food movement to enable the process to move forward with the research, seed development and farming practices needed to feed a hungry world.