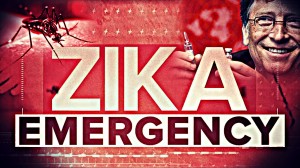 According to shop owners and managers in the town of Wynwood, Florida – also known as the “Zika Zone” – the area has been noticeably empty of the usual crowds that form to see the local murals and shop at local businesses.

The slowdown in pedestrian traffic coincides with the intensified effort by the state of Florida to combat the mosquitoes which carry the Zika virus by blanketing the town of Wynwood with insecticide.

Last week the state of Florida started a campaign to kill off the Aedes species of mosquito by spraying an insecticide called Naled over a 10-mile radius surrounding the Wynwood area.

According to Cornell University, the organophosphate chemical Naled is moderately to highly toxic by ingestion, inhalation and dermal absorption.

Why risk being sprayed with or exposed to a toxic chemical that could negatively affect you neurologically?

It is also interesting to note that the Zika hysteria has been fueled by the supposed fact that the virus causes microcephaly, a birth defect that causes an infant’s head to be significantly smaller than the heads of other children of the same age and sex.

It could be extremely risky and potentially counterproductive to fight the Zika spreading mosquitoes with Naled considering the lab tests that show reduced brain size of 15 percent in animals exposed to the chemical.