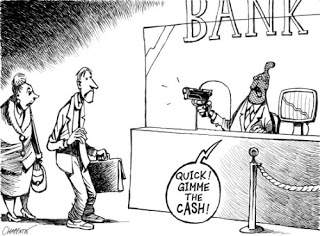 Are they expecting something to happen? As you will read about below, the European Union says that any nation within the EU that does not enact “bail-in” legislation within the next two months will face legal action. The countries that are being threatened in this manner include Italy and France. If you fast forward two months from this moment, that puts us in early August. So clearly the European Union wants everything to be squared away by the end of the summer. Is there a reason for this? Are they anticipating that something really bad will happen in September or thereafter? Why such a rush?

We all remember what happened when major banks were “bailed out” during the last financial crisis. A tremendous amount of taxpayer money was given to the big banks to help prop them up so they wouldn’t fail. This greatly upset a lot of people.

Well, when the next great financial crisis hits Europe, banks are not going to get “bailed out” this time. Instead, we are going to see “bail-ins”.

So precisely what is a “bail-in”?

Essentially, what happens is that wealth is transferred from the “stakeholders” in the bank to the bank itself in order to keep it solvent. That means that creditors and shareholders could potentially lose everything if a major bank in Europe fails. And if their “contributions” are not enough to save the bank, those holding private bank accounts will have to take “haircuts” just like we saw in Cyprus. In fact, the travesty that we witnessed in Cyprus is being used as a “template” for much of the new legislation that is being enacted all over Europe.

The bottom line is that not a single bank account in the European Union will ever be truly safe again.

By this time, everyone in the EU was already supposed to have enacted “bail-in” legislation, but some countries in Europe have been dragging their feet. So now the European Commission (the executive body of the European Union) is giving them a hard deadline. According to Reuters, any nation that has not passed “bail-in” legislation within two months will be subject to legal action…