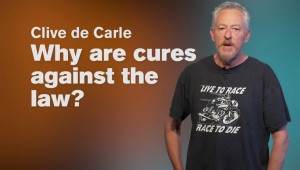 Do your thoughts have a direct effect on your loved ones? Why don’t “they” want us to know about the power of vitamin C? Can fulvic minerals supplement the mineral deficiencies we have due to soil depletion? How has our food morphed over the last century – would a grain “detox” be in order? Why didn’t people used to get Alzheimer’s?

Why do Eastern countries supposedly have the lowest thyroid disease rates, but Jamaica (and the dogs there) are crippled by arthritis? What problem does America have, that Cuba doesn’t? What about reversing autism symptoms? What about doctors like Dr. Bradstreet winding up dead in mysterious ways?

Speaker Clive de Carle attempts to expound on these subjects and many, many more in a head-turning video below. The title’s question is never openly answered – it becomes apparent as the video goes on. It’s a long one but the conversation carries you away.