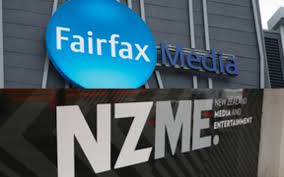 By Wake Up New Zealand

New Zealand media companies are now owned by a small number of private funds and investment banks. In the case of MediaWorks, financial ownership has intensified its profit imperatives, and led to the demolition of its news and currents affairs programmes.

The revenue structures of media companies continued to encounter difficulties, and new forms of partnership and collaboration emerged.

For example, Fairfax partnered with Sky TV, The Huffington Post and The New York Times; and APN with News Corp and The Washington Post in content delivery.

Additionally, NZME, TVNZ, MediaWorks and Fairfax joined forces in advertising against companies such as Facebook and Google.

In 2015, Rupert Murdoch returned to the New Zealand media market by acquiring a 15 per cent stake in APN, publisher of The New Zealand Herald. In contrast, mining billionaire Gina Rinehart sold all of her Fairfax shares. Consequently, the investment bank Morgan Stanley became the company’s largest shareholder.

Yet again MediaWorks became owned by one financial institution.