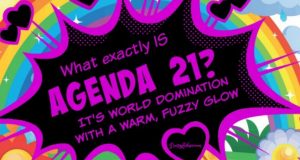 When most folks hear the words “Agenda 21” they have one of three responses:

Some folks don’t even believe it exists,  others think it exists but is a good thing turned into a nasty conspiracy theory, and the majority are blissfully oblivious. Even though many people don’t realize it, we’re all being nudged toward an Agenda-21 ruled world. It’s easy, too, because it promises a green world of lollipops and rainbows and most of it will be “free.”

To put it as simply as possible, Agenda 21 is world domination with a warm, fuzzy glow. Once you understand it, you’ll never look at “regulations” the same way again.