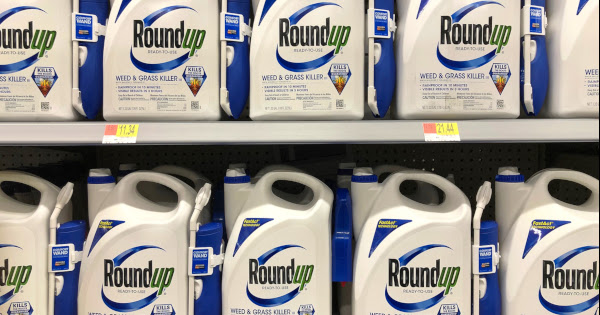 After years of battling Monsanto, of working to expose the lies about glyphosate and Roundup weedkiller, we’re seeing glimmers of hope.

But this fight is far from over. And we desperately need your help to keep it going.

Within the past eight months, juries in two key trials against Monsanto have unanimously agreed that Roundup caused the plaintiffs’ non-Hodgkin lymphoma cancers.

No amount of money makes up for the pain and suffering Roundup weedkiller has caused the victims in these two trials, or the tens of thousands of other people sickened by exposure to glyphosate.

But here’s what both these trials have made clear: The overwhelming evidence points to Roundup as a cause of cancer. And what’s more, it shows that Monsanto has known all along that Roundup causes cancer—and yet the company has gone to great lengths, and spent millions of dollars, to hide that evidence from the public.

In an article published by the Guardian, U.S. Right to Know’s Carey Gillam wrote:

Even the US district judge Vince Chhabria, who oversaw the San Francisco trial that concluded Wednesday with an $80.2m damage award, had harsh words for Monsanto. Chhabria said there were “large swaths of evidence” showing that the company’s herbicides could cause cancer. He also said there was “a great deal of evidence that Monsanto has not taken a responsible, objective approach to the safety of its product . . . and does not particularly care whether its product is in fact giving people cancer, focusing instead on manipulating public opinion and undermining anyone who raises genuine and legitimate concerns about the issue.”

Where does all that poison end up? In soils, in drinking water, on your food—and in your body.

The widespread presence of glyphosate in everything from bread to cereal to snack bars to fruit juices to baby foods to ice cream to beer and wine has been well documented.

The latest report? Widespread glyphosate contamination in foods sold by popular chain restaurants, including many that market themselves as “healthy,” “natural” and even “organic.”

The anti-Monsanto verdicts, the testing and reporting about glyphosate in our foods, the investigative reports showing Monsanto’s extreme efforts to discredit the scientists who uncover the truth about glyphosate and Roundup have all led to greater consumer awareness.

But even as more cities and school systems announce plans to ban glyphosate, the U.S. EPA fails to act on the evidence. In fact, the EPA recently (and very quietly) moved to disapprove state efforts to impose their own restrictions on pesticide use!

We are in the middle of our own lawsuit against Monsanto, for placing misleading claims on bottles of Roundup sold to consumers.

We continue to test products for glyphosate, to report on those test results, and to go after the companies that claim their glyphosate-contaminated food is “natural.”

We are also a major funder of U.S. Right to Know, a nonprofit public interest, consumer and public health organization that has been deeply involved in exposing Monsanto’s lies and government ties.