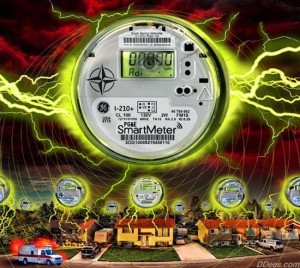 Untested 28GHz radiation blasting from millions of new hidden antennas and tuned-up “smart” meters. A corporate free-for-all, with oversight eliminated. Total, for-profit surveillance. An “internet of everything” with “hundreds of billions of microchippable products”. Everywhere and everything… and eventually, everyone.

This is not sci-fi. This is FCC Commissioner Tom Wheeler’s insane new plan, slickly badged as “5G”.

SPEAK UP AND STOP “5G”: http://www.parentsforsafetechnology.org/stop-5g-spectrum-frontiers.html

Check out Wheeler’s creepy speech for yourself, here. He stammers through it like a man mostly-possessed. This is desperation on their part. They know full well that the next phase of the megalomanic rollout needs to happen before the SHTF for them, and the tipping point is reached in terms of a convergent awareness of wireless health / surveillance / technocratic insanity — and their liability.

So let’s engage and make some noise. Your voice is needed today. This plan is being fast-tracked & voted on, Thursday July 14. Let the FCC and this government know that if they do not listen to science and reason, they will be held accountable and liable for their actions. Money is not only their god – it’s their language.

4) Apple manual states to keep your iPhone away from your body at all times:
http://www.newsweek.com/iphone-6-bendgate-apple-says-your-iphone-shouldnt-go-your-pocket-avoid-273313

8) More than 60 international warnings on Wi-Fi and microwave radiation:
http://www.safeinschool.org/2011/01/international-warnings-on-wi-fi.html

12) Another insurance giant, Lloyd’s of London, will not insure anything wireless:
http://www.naturalhealth365.com/wi-fi-radiation-electromagnetic-fields-lloyds-of-london-1356.html

15) WHO involved in suppression of additional science showing harm, since 2011:
https://takebackyourpower.net/tag/who/

18) Dozens of specific scientific abstracts that all show harm:
http://emfsafetynetwork.org/shortcut-to-science/