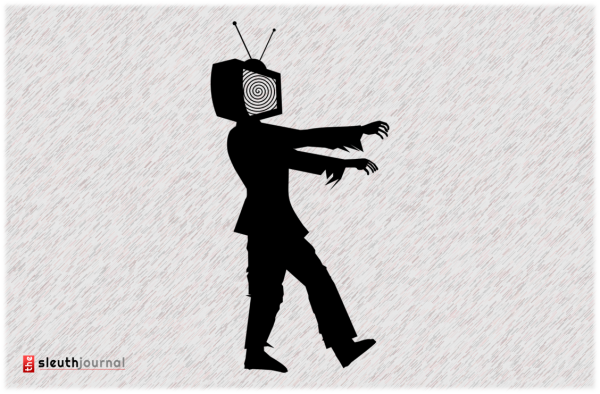 Several months ago, a supporter of “Conspiracy Corner News” brought to my attention a quite astonishing example of monstrously deliberate brain washing by the United States government and their counterparts in the television media. I could keep it on the back burner no longer, as it is utterly amazing and horrific.

I am fifty-one years of age. When I was a child in the mid 1960’s, there was no twenty-four hour television. (What a healthier nation we would be if this were still the case!) At about midnight or 1:00 a.m., all the television stations would “sign-off”, that is, say “good-bye” for the night, until about five or six o’clock the next morning, when programming would resume. The “sign-off” would traditionally be the National Anthem, with patriotic pictures showing, while the words of the song ran across the bottom of the screen.

A former employee of one of these television stations took an old sixteen millimeter film reel of such a “sign-off” home as a retirement present to themself. Later, a relative of theirs transferred the film to VHS videotape. After that, a friend made a DVD of it from the videotape. After this, another friend uploaded it to Youtube for nostalgia’s sake. After that, an observant Youtube viewer deciphered its notorious hidden subliminal message.

The science-fiction cult-classic film “They Live”, by John Carpenter, immediately came to mind, when the eerily creepy words were revealed in the newly uncovered “National Anthem” from the 1960’s. In “They Live”, character John Nada (played by Roddy Piper) stumbles across a band of underground “Truthers” who have discovered that mankind is being held in a perpetual state of hypnosis through never-ending subliminal messages on television, radio, and in print.

Hidden in this fifty year old television “National Anthem”, courtesy of the Federal Government, are the words . . .

REBELLION IS NOT TOLERATED

DO NOT QUESTION GOVERNMENT GOD

I have been a filmmaker for about three decades, and upon strict analyzation of this “sign-off” film of the “National Anthem”, it appears to be quite genuine.

If this is what the United States Government and their buddies at the major television networks were willing and capable of fifty years ago, imagine, if you dare, what they are willing and capable of TODAY. With images, sounds, and even radio waves, such as cell phone transmissions, in order to hypnotize the public to be herded toward, and over, the cliff of “consumerism” to their own destructive demise.