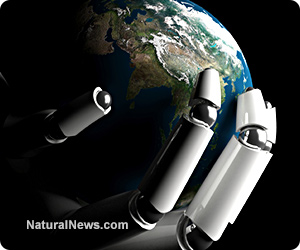 by Mike Adams, Editor of NaturalNews.com

Earlier this week, AI expert Ray Kurzweil predicted that robots would “outsmart humans” by 2029. It’s probably going to be much sooner, given that humans are currently suffering a rapid cognitive decline due to widespread water fluoridation (which even Harvard experts say causes lowered IQs), heavy metals contamination of the food supply, and of course the IQ-cannibalizing broadcasts of MSNBC and CNN.

As much as Kurzweil seems somewhat loony for his ideas about “merging with the machines” and uploading your mind into a supercomputer, he’s not someone who can be readily dismissed, even by his skeptics. He’s obviously a very intelligent individual, and he’s been right about a great many things in the history of technological achievement. When Kurzweil publicly predicts robots will out-think humans by 2029, we’d better take note.

“By 2029, computers will be able to do all the things that humans do. Only better,” reports The Guardian in an interview with Kurzweil.

Google is rapidly acquiring advanced military robotics and breakthrough artificial intelligence technologies. Kurzweil is a top executive at Google, the very same company which has been on a robotics buying spree, purchasing top military-level robotics companies for billions of dollars.

But what will power the brains of these weapon-yielding military robots? Google also just spent hundreds of millions of dollars to purchase the DeepMind company, DNNresearch and a long list of others. What’s clear is that Google is piecing together the technology needed to deploy a literal army of highly intelligent, armed, “self aware” and self-mobile machines. Their uses are, of course, incredibly diverse. They could be servant robots for homeowners or they could be Terminator-style battlefield soldiers. There’s no limit to their application, and whatever company owns this technology will, without question, dominate our world.

If Kurzweil is right, the beginning of this is barely 15 years away, and it begs the question: What would a new race of intelligent machines choose to do with humanity?