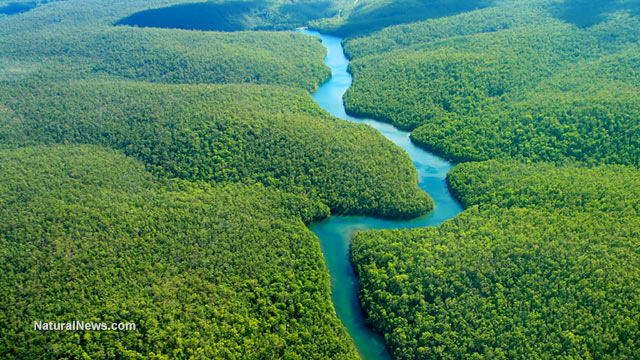 (NaturalNews) The World Wildlife Fund (WWF), a charity that began in 1961, is on the verge of destroying everything it stands for. For decades, the charitable organization played an integral role in conserving important regions while working on behalf of animal welfare around the world. In the new millennia, however, the WWF has strayed from its roots. It has been watered down and infiltrated by the nature-destroying ideas of the biotech industry.

The WWF is not what they once were. In the recently published book, PandaLeaks: The Dark Side of the WWF, German author Wilfried Huismann exposes everything, from the charity’s outrageously high salaries to its recent partnership with agrochemical giant Monsanto.

Suppressed new book exposes dangerous relationship between WWF and Monsanto
When the book came out in 2012, the WWF legal team tried to censor it. They succeeded for several months, afraid of being exposed for promoting Monsanto’s genetically modified crops. In the fall of 2014, the book was re-released, shedding light on the funds the WWF took from Monsanto. The book endured several lawsuits and revealed the dark side of the WWF’s relationship with the multinational agrochemical seed engineer. The book reveals that the WWF collaborated with Monsanto to create a “Round Table on Responsible Soy.” This means WWF leaders discussed ways to unleash GMO soy around the world while convincing entire countries that GMOs and agrochemicals are the most environmentally-conscious method of farming.

Monsanto is infamous for “green washing” their products, making people think they are for the environment. The corporation calls their GMO soy a “responsible” choice for protecting the environment. This deceit ultimately infected the WWF, which went along with plans to unleash GMO soy in the Amazon. Now Brazil and Argentina are being turned into GMO plantations as the Amazon is cut down to make way for Monsanto’s GMO “save the planet” brainwashing.

The clever operatives at Monsanto have found a way to convince environmentally conscious charities such as the WWF to go along with their plans for agricultural control and world dominance. Every donation that is made to the WWF is now supporting the very ideas that destroy the natural environment. Monsanto’s agrochemicals have been linked to mass die-offs of honey bee and monarch butterfly populations. Without these key pollinators, many vegetables and herbs can’t reproduce. Monsanto’s agrochemicals pose a threat to ecosystems, all the way down to wiping out the good bacteria in the soil and the human gut. When the quality of the soil is ignored, the nutrition of the crop reduces over time, ultimately affecting people’s health.

Amazon rain forest being cut to pieces to make room for GMO plantations
The Amazon GMO soy boom is causing millions of acres of rain forest to be cleared. Between 2007 and 2008, nearly 3 million acres were destroyed in the Brazilian Amazon rain forest as logging, soy plantations and cattle ranching took over the region. The WWF has no interest in protecting these regions any more because they are infiltrated by the ideas of Monsanto, which is all for clearing out the rain forest and taking over the area’s agriculture.

Monsanto is not feeding the world. They are raping the natural diversity on this planet and controlling what farmers can grow to stay in business. Brazilian soy is now over 90 percent genetically modified. Much of the GM soy is used to sell animal feed back to farmers as their free range, biodiversity-rich farming practices are taken from them and replaced by fields of GMO soy.