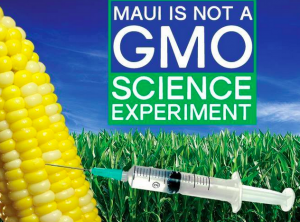 The day after the island of Maui passed a moratorium on GMO crops, Monsanto announced it was suing them to override the will of the people.
Last Tuesday, the voters on the Hawaiian island of Maui passed a moratorium on genetically engineered crops. The very next day, Monsanto announced plans to sue Maui to block the law from going into effect.
Maui is one of the most biologically diverse places on earth — but it’s being turned into one giant, open-air biological experiment by the rampant use of GMO crops and pesticides. Monsanto and its allies spent more than $8 million to convince voters to defeat the GMO moratorium and still lost. So now they’re sending an army of lawyers to overturn the will of the people.
Monsanto, Dow, BASF, and other huge biotech companies have flocked to Hawaii because the climate allows them to plant and grow seeds that they can sell all over the world.
Today, nearly 10 percent of all Hawaii’s farmland is owned by just five biotech firms, including Monsanto. That’s why Maui voters have been asking their elected officials to do something about GMOs and the heavy pesticides that go with them. But the politicians, most of them funded by Monsanto, have ignored the people. So earlier this year, they took matters into their own hands, collecting thousands of petition signatures to force the issue to be put before voters directly as a citizen referendum. And last Tuesday, the voters spoke: no GMOs on Maui.
Whatever you think about GMO crops and pesticides, it’s just wrong for a corporation to use legal action to intimidate the public and override the democratic process. That’s why it’s so important we stand up, and stand together, whenever Monsanto tries to use these dirty tactics.
More information:
Monsanto strikes back after Maui voters support GMO moratorium, ABC KITV4 Hawaii, November 5, 2014