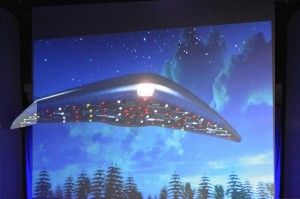 (August 7, 2014) The Secret Space Program held their 2nd annual conference in San Mateo, CA on June 28-29, 2014, where a host of influential speakers armed with well documented and straightforward facts and backgrounds in the military, space and financial systems presented compelling evidence of a Black Budget space program woven into the military industrial and defense complex thru a hidden finance system run by the Bilderberg group.

The vast and relatively yet unreported secret space programs underway are financed by the formation of President Truman’s 1947 Axis Plunder, the National Security Act and the Hidden Finance System the entire world has operated under since the post WWII era. Also known as the International Monetary Fund or World Bank this rather ingenious system of hidden finance devised by what some refer to as “ the Cabal” allows control of much of the world’s banking, economic and military/industrial activity.

The motivation or expected outcome of this alleged Global Domination scheme is unclear, but rumors of its existence have permeated the alternative media for years and it is widely suggested that they plan to create a One World Government, following the mandate inscribed at the Georgia Guidestones.

Conclusions about the availability of anti-gravity powered interstellar craft unveiled at the program are based in part on the testimony from previously classified documents and first-hand accounts made available thru whistleblowers often connected to the Disclosure Project, who made similar statements at the Citizen Hearing on Disclosure held at the National Press Club in Washington DC in 2013.