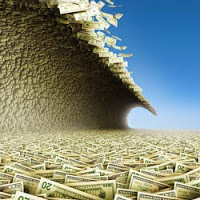 The banksters, who nearly tanked the global market in their collective effort to loot the peoples of the world, are operating out of “larger than ever” big banks.

They are not only “too big to fail,” but too big to contain. The derivatives have not been stopped or controlled; leveraging ratios are still out of control; and bank runs could happen at anytime, subjecting big banks to desperate calls on cash they would be unable to fulfill; apparently everything they have is loaned out and sometimes demanded back “each and every day.”

The entire thing is a dangerous high wire act that looms over our otherwise ordinary lives with great peril.

The Corporate Reform Coalition (CRC) did a study titled Still Too Big to Fail (PDF) that underscores the dangers of the current funny money schemes and the fact that even the weak-kneed requirements of the Dodd-Frank “Wall Street Reform Act” have not been fulfilled.

“The top six bank holding companies are considerably larger than before, and are still permitted to borrow excessively relative to the assets they hold,” the report states. “They are dangerously interconnected and remain vulnerable to sudden runs, because they borrow billions of dollars from wholesale lenders who can often demand their cash back each and every day.”

It goes on: “Banks can still use taxpayer-backed insured deposits to engage in high-risk derivative transactions here and overseas. Compensation incentives fail to discourage mismanagement and illegality, given that when legal fees, settlements, and fines mount, it is usually the shareholders, not the corporate executives who pay.”

And, the report warns, “[s]hould one of these giant banking firms fail again, it appears that the damage will not be contained.”

“Avoiding another meltdown depends on the will of federal regulators to use the new powers they were granted in the Dodd-Frank Wall Street Reform and Consumer Protection Act,” said Jennifer Taub, author of the report and professor of law at Vermont Law School. “If they behave as if they are beholden to the banks, we will likely face a more severe crisis in the future.”

So, we are admittedly completely vulnerable to another devastating economic meltdown… and virtually nothing can stop the contagion going completely pandemic and global in proportions. Brace yourself and breathe.