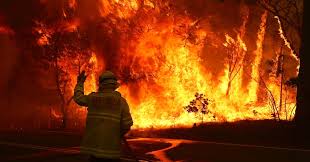 Authorities in Australia have arrested close to 200 people for deliberately starting the bushfires that have devastated the country, yet the media and celebrities continue to blame “climate change” for the disaster.

The fires have caused at least 18 deaths, destroyed thousands of homes, millions of hectares of land and killed hundreds of millions of animals.

A total of 183 people have been arrested by police in Queensland, NSW, Victoria, South Australia and Tasmania for lighting bushfires over the last few months, figures obtained by news agency AAP show.

In New South Wales, 24 people were arrested for arson, risking prison sentences of up to 25 years.

Around 85 per cent of bushfires are caused by humans either deliberately or accidentally starting them, according to Dr Paul Read, co-director of the National Centre for Research in Bushfire and Arson.

“Police are now working on the premise arson is to blame for much of the devastation caused this bushfire season,” reports 7 News Sydney.

New environmental policies that restrict “prescribed burning,” where land owners burn off flammable ground cover in cooler months in a controlled manner so it doesn’t contribute to bushfires, have also exacerbated the problem.

The fact that the bushfires were deliberately started and have nothing to do with man-made climate change hasn’t prevented that being the dominant narrative.