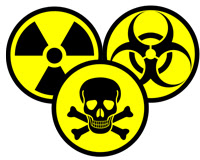 Yes, prior to Gulf War 2, all sorts of people were lying about WMDs in Iraq. There was the whole business about the yellowcake and Niger, and Colin Powell speaking before the UN.

There was a WMD depot in Iraq that wasn’t a depot.

There were people who said they had secret evidence Saddam shipped weapons out of the country. And maybe they did have evidence.

But this is a different story. It involves the prospect of inspectors finding very serious weapons and then saying, “Wait! The weapons’ containers have American labels on them!”

That didn’t happen, but it could have. And then what a fiasco would have ensued, since the US government was about to wage war to “end Saddam’s threat.” Yet, the US had armed him.

In 1975, the US signed on to an international treaty banning the production, use, and stockpiling of biological weapons. Ditto for chemical weapons, in 1993. Another treaty.

Here’s a quote from the Washington Post (9/4/13, “When the US looked the other way on chemical weapons”): “…The administrations of Ronald Reagan and George H.W. Bush authorized the sale to Iraq of numerous items…including poisonous chemicals and deadly biological viruses, such as anthrax and bubonic plague…”

Between 1985 and 1989, a US 501C3 firm, American Type Culture Collection, sent Iraq up to 70 shipments of various biowar agents, including 21 strains of anthrax.

Between 1984 and 1989, the CDC (Centers for Disease Control) sent Iraq at least 80 different biowar agents, including botulinum toxoid, dengue virus, and West Nile antigen and antibody.