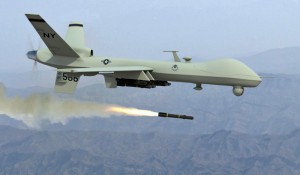 It has been predicted that the development of drone surveillance by the U.S. would spark a global race to develop new drone capabilities, leading to a potentially dystopian future of drone wars where combat and even assassinations can be performed by fleets of insect-like microbots. The Washington Post reported in July, 2011:

More than 50 countries have purchased surveillance drones, and many have started in-country development programs for armed versions because no nation is exporting weaponized drones beyond a handful of sales between the United States and its closest allies. (Source)

The number of countries possessing surveillance drones has now risen toward 90, plus the United Nations itself has launched its own fleet. Armed drones are also proliferating rapidly with 23 countries believed to have unmanned weaponized vehicles. Two new countries are now claiming to be part of that list: Saudi Arabia and Iran.

As you will see from the various updates below, I have been chronicling the global drone arms race in its various forms for quite some time. We are now reaching the threshold where the race to acquire drones is about to transform into who has the most, who has the most lethal, and who can properly incorporate autonomous functions to build the next generation of robotic warfare and dominate the planet.

Saudi Arabia’s new claims to have bought a drone fleet from China that would rival America’s Predator drones is somewhat puzzling due to the fact that Saudi Arabia has been a close partner since at least 2011 in US-led drone strikes in Yemen operating from a CIA base within Saudi borders.

Moreover, it was reported more than a year ago that Saudi Arabia likely purchased an armed drone from South Africa, supposedly because they couldn’t acquire one from the U.S. or China. The video below is a good discussion of what might be behind the desire for Saudi Arabia to possess armed drones, as well as the political reasons for secrecy about various allegiances.