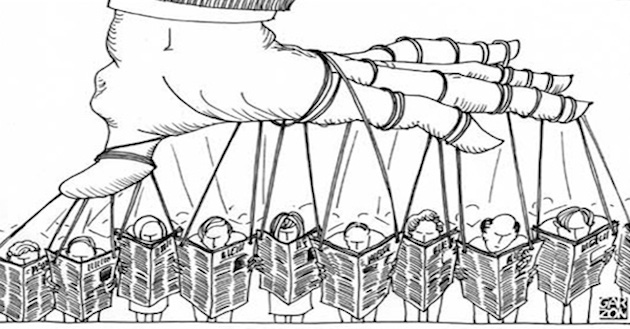 Ninety percent of news media, be it television, radio, print or online, are controlled by six corporations. As a result, the vast majority of what you read, see and hear is part of a carefully orchestrated narrative created and controlled by special interest groups.

When you combine that with other astroturf and public manipulation schemes that hide the identity of these special interests, the end result is, to use investigative journalist Sharyl Attkisson’s term, a Truman-esque fictitious reality, where medical journals, doctors, media and presumably independent consumer groups all seem to be in agreement. The problem is it may all be false.

Attkisson is a five-time Emmy Award-winning anchor, producer and reporter whose television career spans more than three decades. In 2009, she blew the lid off the swine flu media hype, showing the hysteria was manufactured and completely unfounded. At the time, I interviewed her about these findings. I’ve included that fascinating interview below.

Three years ago, she left CBS to pursue more independent venues of investigative journalism, and wrote “Stonewalled: My Fight for Truth Against the Forces of Obstruction, Intimidation, and Harassment in Obama’s Washington” — an exposé on what really goes on behind the media curtain.

Why Everyone Must Be Aware of Astroturfing

The featured video is a TEDx Talk Attkisson gave in 2015, in which she discusses the methods employed by special interest groups to manipulate and distort media messages. For example, astroturfing — false-front “grassroots movements” that are in fact funded by political parties or private industry — are now “more important to these interests than traditional lobbying of Congress,” she says. She explains the term “astroturf” thus:

“It’s a perversion of grassroots, as in fake grassroots. Astroturf is when political, corporate or other special interests disguise themselves and publish blogs, start Facebook and Twitter accounts, publish ads and letters to the editor, or simply post comments online, to try to fool you into thinking an independent or grassroots movement is speaking.

The whole point of astroturf is to try to [give] the impression there’s widespread support for or against an agenda when there’s not. Astroturf seeks to manipulate you into changing your opinion by making you feel as if you’re an outlier when you’re not …

Astroturfers seek to controversialize those who disagree with them. They attack news organizations that publish stories they don’t like, whistleblowers who tell the truth, politicians who dare to ask the tough questions and journalists who have the audacity to report on all of it.”

If you’re like most, you probably rely on certain sources more than others when it comes to information. WebMD, for example, dominates for health information, Snopes for checking the latest rumors and Wikipedia for general facts, figures and details.

Attkisson has a great deal to say about Wikipedia, calling it “astroturf’s dream come true.” Wikipedia is advertised as a free encyclopedia, where information is added and edited by the public. Anyone can add to or edit any given Wikipedia page. Or so they say.

“The reality can’t be more different,” Attkisson says, explaining that many pages have been co-opted and are controlled by anonymous Wikipedia editors on behalf of special interests. “They forbid and reverse edits that go against their agenda,” she says. “They skew and delete information, in blatant violation of Wikipedia’s own established policies, with impunity.”

Even the smallest factual inaccuracies are impossible to correct on these agenda-driven pages. As just one example, in 2012, author Philip Roth tried to correct a factual error about the inspiration behind one of his book characters cited on a Wikipedia page. His correction was repeatedly reversed and, ultimately, he was told he was not considered a credible source!

Worse, a study1 comparing medical conditions described on Wikipedia with published research found that Wikipedia contradicted the medical literature an astounding 90 percent of the time. So, be aware — Wikipedia is NOT the place for accurate and reliable medical information.

Who’s Who and What’s What?

The extent to which information is manipulated is enormous. Let’s say you hear about a new drug for an ailment you have, or your doctor recommends it, and you decide to research it to be on the safe side. Ultimately, you conclude it is safe and effective because everywhere you look, the information seems to support this conclusion. You feel good knowing you’ve done your homework, and fill the prescription. What you don’t know is that: