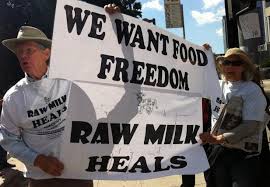 (NaturalNews) Raw, whole milk has been consumed for centuries and has long been acknowledged for its health benefits. Several research studies show superior growth and health for those children drinking raw milk compared to pasteurized milk.
(http://www.realmilk.com/brochures/real-milk-brochure/)

Raw milk has been proven to prevent scurvy, the flu, TB, and allergies. Pastured whole, raw milk contains essential fat soluble vitamins A, D and K2 along with B12, B6, C, calcium, iron, iodine and minerals which can easily be utilized by the body. When milk is pasteurized, most of these nutrients are destroyed. The remaining protein, calcium and D vitamins are denatured and poorly absorbed. In other cases, the body begins an attack on what it views as a foreign substance andallergic reactions can develop. Pasteurized milk consumption has been linked with osteoporosis, tooth decay, arthritis, heart disease and cancer.

Cheap, swill milk was produced in the 1800s in order to increase profits. These milk producing cows lived in deplorable conditions, tied up in confinement and fed distillery waste instead of their normal diet of green pasture. 50 percent of those who drank this milk died.

The decision to pasteurize milk was based on economics

In 1910, the majority of those who met to resolve the “milk” problem of unsafe swill milk were opposed to pasteurization. Most wanted raw milk to be certified to ensure high quality, safe milk which maintained its high nutrients. Decision makers were afraid of the costs to certify raw milk dairies so decided to pasteurize milk instead. Milk producers with unsafe practices began pasteurizing their milk rather than clean up their farms.

In 1945, a false story was first reported to have taken place in a made up town called Crossroads, USA, where raw milk was blamed for an outbreak of undulant fever. This unsubstantiated report was repeated by the Progressive and Reader’s Digest. This began an effort to eliminate raw milk production.