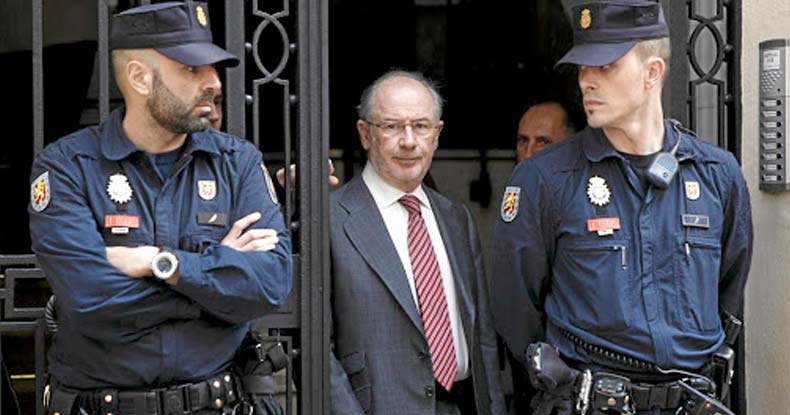 In many other countries, excluding the United States, corrupt bankers are often brought to task by their respective governments. The most recent example of a corrupt banker being held accountable comes our of Spain, in which the former head of the International Monetary Fund (IMF), Rodrigo Rato was sentenced to four years and six months behind bars.

According to the AFP, Spain’s National Court, which deals with corruption and financial crime cases, said he had been found guilty of embezzlement when he headed up Caja Madrid and Bankia, at a time when both groups were having difficulties.

Rato, who is tied to a slew of other allegations was convicted and sentenced for misusing €12m between 2003 and 2012 — sometimes splashing out at the height of Spain’s economic crisis, according to the AFP.

The people of Spain were outraged over the scandal as it was discovered during the height of a severe financial crisis in which banks were receiving millions in taxpayer dollars. Bankia was eventually nationalized and given 22 billion in public money.

Although he was sentenced, Rato, who is also a former Spanish economy minister, remains at liberty pending a possible appeal because of highly connected elite status.

Rato was brought down in a massive effort by Spain to get rid of corruption within the banking system. The problem had gotten so bad, that Spain decided to clean house, and 65 people, include Rato, were brought to task.