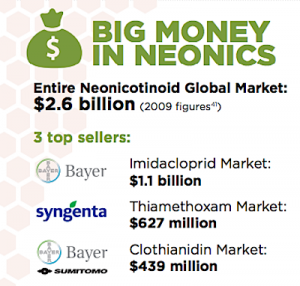 If you like to eat, then you should care about what’s happening to bees.
Did you know that two-thirds of our food crops require pollination — the very foods that we rely on for healthy eating — such as apples, berries, and almonds, just to name a few.
That’s why the serious declines in bee populations are getting more attention, with entire campaigns devoted to saving bees.

A strong and growing body of evidence points to exposure to a class of neurotoxic pesticides called neonicotinoids — the fastest-growing and most widely used class of synthetic pesticides — as a key contributing factor to bee declines.
The European Union banned the three most widely used neonicotinoids, based on strong science indicating that neonics can kill bees outright and make them more vulnerable to pests, pathogens, and other stressors.

Enter the corporate spin doctors. As my new report with Friends of the Earth details, three of the leading pesticide corporations — Bayer, Syngenta, and Monsanto — are engaged in a massive public relations disinformation campaign to distract the public and policymakers from thinking that pesticides might have something to do with bee death and destruction.

Big Tobacco honed these strategies for decades, stalling action that resulted in millions of preventable deaths. As Bayer stockholders meet in Germany this week, this report shines a critical light on these destructive corporate practices.

Read the entire article and learn the 7 tactics pesticide companies are using to spin the bee crisis: http://www.foe.org/news/blog/2014-04-follow-the-honey-7-ways-pesticide-companies-are-spinning-bee-crisis