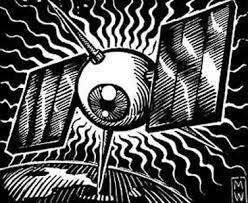 Let’s suppose the elitist scum working to ruin and control our lives and planet are in some fashion real people to some extent. I know, a stretch, but let’s try. So how can they perpetrate such horrors on humanity? How could such madness be justified in the minds of men, however psychopathic?

Actually, it’s easy. For self promotion, preservation and power they’ve convinced themselves that what they are perpetrating is the right thing to do. But what’s their fundamental tenet for mass murder?

Everything they think and believe is a fabricated bastardization and reversal of any real Truth, but in their minds they’ve decided this wicked, inhuman illuminist takeover makes sense. Especially with their fat cheeks being firmly ensconced in the seats of power.

Oh, the vestiges of their human conscience may give some of them a nudge in some cases, but it’s been shut down almost completely for most of them. It has to be. You can’t have empathy and wreak such death dealing havoc on nature and humanity.

If you’ve ever known or observed a pathological liar, this cauterized mindset is their way of life. Politicians do it without the slightest compunction. To them it’s part of the job description for ruling the unwashed masses. How is it justified logically? The old “necessary evil” ruse, as in the justification for 9/11 and myriad of other actions.

The even more amazing thing is that they smugly revel in this ugliness, thinking they’re the “good guys”.

Convincing the Cattle to Die – Eugenics Justifies All
Think about it. What a slam dunk for world domination to so twist perception to where humanity is the problem that needs to be curtailed by draconian controls while being systematically exterminated like a pest infestation. Be it engineered wars, poverty and food shortages; drugging, corrupted food, and water; dumbed down information and media, or injecting toxins in our bodies, all is fair game to them.

Eugenics is the “tie that binds”, the glue that holds all the other lies conveniently together. And it takes the sting out of outright mass murder. For them. It’s a “cleaning” and “preparation” for their desired world to come.

Look what Agenda 21 controls are perpetrated via things like climate change and CO2 fabrications. Sure, we’re in the throes of massive climate extremes for many reasons, many of them geoengineered, but to blame it on cattle flatulence and human breathing must be some kind of macabre inside joke. Bottom line is they are planning a great “culling of the herd” and need our permission. We’ve read about it for decades in their elitist writings, and this is how they justify it and hope to convince us as much as possible of the same. That’s the alert.