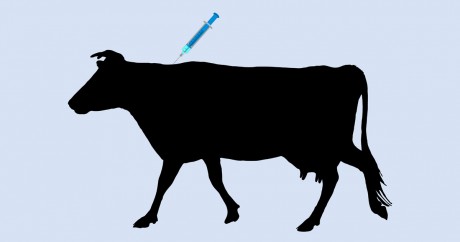 By Katherine Paul – associate director of the Organic Consumers Association.

We’ve all grown accustomed to the steady parade of television ads—$3 billion year worth, by some estimates— urging us to “ask our doctors” about the latest miracle drug. Pharmaceutical ads have been commonplace since the 1990s, after the U.S. Food & Drug Administration (FDA) cleared the way for prescription drug companies to aggressively market their wares directly to consumers.

Wisdom and ethics aside, it’s easy to see why Big Pharma would push pills to humans, to treat human ailments. It’s big money.

But a drug company that makes animal drugs, purchased not by consumers but by factory farms, advertising direct to consumers who will never actually purchase those drugs? How does that make sense?

If you’re Elanco, the $2.3-billion animal drug division of Eli Lilly, you make it seem sensible by spinning the message. In Elanco’s case, the message is this: Without our animal drugs, the world will starve.

It’s a message that paints the drug maker as an altruistic savior, instead of the profit-motivated animal abuser and public health threat it actually is.

It’s been about a year since I accidentally stumbled on Elanco’s ENOUGH Movement campaign. Curious as to why a corporation that pushes animal drugs would spend millions on a consumer campaign, I “joined” the movement.

Since then, I’ve routinely received emails from “The Movement.” The subject lines generally go like this: “More People, Improved Diets, ENOUGH Food” or “When It Comes to Harvesting, Will We Have ENOUGH?” or, one of my favorites, “Pork: Can We Have ENOUGH?”

The messages are intended to evoke fear—fear of scarcity, fear of hunger. But these messages strike a different kind of fear in the hearts of those who know anything about the real causes of hunger—poverty,  poor distribution, waste, climate instability.

The fact is, we already produce enough food to feed the world. And as research conducted by the United Nations Food and Agriculture Organization has clearly shown, to achieve global food security we need a “rapid and significant shift from conventional monoculture-based and high external-input-dependent industrial production toward mosaics of sustainable regenerative production systems that also considerably improve the productivity of small-scale farmers.”

What we should really be afraid of is the fact that drug use on factory farms has led to a huge public health problem—antibiotic resistance. In the U.S., at least 2 million people are infected with antibiotic-resistant bacteria every year, and at least 23,000 die as a result, according to the Centers for Disease Control and Prevention.

Not to mention that animals pumped with drugs like ractopamine, banned in China, the European Union and more than 100 other countries—but not here in the U.S.—suffer and become ill. Yet we still turn them into meat for human consumption.

Simmons is on a counteroffensive. Increasingly, the drugs Elanco makes—including antibiotics and productivity enhancers—have come under attack by food activists and, in some instances, scientists and regulators. Food companies and fast-food chains are responding to consumer demand for healthier, more natural food that doesn’t contain some of the drugs that have made Elanco a $2.3 billion business.

Elanco, the animal-health division of the pharma giant Eli Lilly, makes one of the world’s most controversial growth-promoting chemicals for meat production: ractopamine, marketed as Optaflexx for cattle, Paylean for pigs, and Topmax for turkeys.

A member of the class of medicines known as beta-agonists, which are also given to asthmatic people to help relax their airway muscles, ractopamine makes animals rapidly put on lean weight—but it also mimics stress hormones and makes their hearts beat faster. Studies suggest that it makes livestock more vulnerable to heat. Ractopamine is banned in the European Union, China, and more than 100 other countries, and it faces mounting criticism here in the United States.

So controversial is ractopamine, that according to PoliticoPro, China recently agreed to resume imports of U.S. pork from six processing plants and eight cold storage facilities, only after those plants and facilities pledged to not to process hogs raised with ractopamine. PoliticoPro quoted a U.S. Department of Agriculture (USDA) official as saying:  “This will allow a greater share of U.S. pork and product exports to China in the coming months.”

What the official didn’t say? We’ll save the ractopamine-laced pork for consumers here in the U.S.

And what about those consumers who don’t want ractopamine, or any other unnecessary drugs, in their meat? Simmons told BloombergBusinessweek his message is this:

…that a minority of pushy elites—vegans, organic die-hards, and GMO-bashers—is keeping vital technology from farmers, that animal protein is a crucial source of nutrition, that unleashing innovation would allow farmers to produce enough meat, milk, and eggs to meet demand without draining additional natural resources.

To which we say, hogwash. And ENOUGH, already.