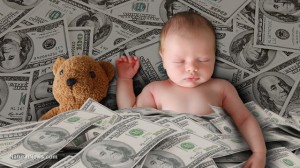 (NaturalNews) Critics of globalism and the climate change narrative have been warning us for some time that things are not what they seem, and that the true globalist agenda involves a plan which includes depopulation as one of its central goals.

Now, the global elitists are beginning to publicly play their hand by introducing the concept of taxing childbirth. In short, they have disguised their global depopulation scheme as being a necessary action in the effort to fight climate change.

‘Maybe we should protect our kids by not having them’

A recent NPR broadcast documents the unveiling of the depopulation/taxation scheme as envisioned by Travis Rieder, a “philosopher” with the Berman Institute of Bioethics at Johns Hopkins University, who claims that not having children is a “moral duty.”

“Here’s a provocative thought: Maybe we should protect our kids by not having them,” says Rieder.

Provocative indeed, but the scheme (at least in its first stage) is being candy-coated to make it sound more palatable to the average citizen.

The depopulation birth tax would apply more heavily to the rich, while encouraging the poor to use more birth control, according to Rieder and his colleagues, who say that the plan will not be as “abusive” as China’s one-child policy.

From NPR:
“It aims to persuade people to choose fewer children with a strategy that boils down to carrots for the poor, sticks for the rich.

“Ethically, Rieder says poor nations get some slack because they’re still developing, and because their per capita emissions are a sliver of the developed world’s. Plus, it just doesn’t look good for rich, Western nations to tell people in poor ones not to have kids.”

Of course, the rich can afford a “childbirth tax,” while the rest of us non-elites will be the ones forced to abandon having children to comply with the depopulation scheme.

Rieder claims that by reducing worldwide childbirth rates by “half a child per woman,” carbon emissions could be reduced by as much as one-quarter of the amount needed to avoid the “tipping point” that will lead to 4 degrees Celsius global warming by the end of the century – a level of warming that will ostensibly make the world “largely uninhabitable for humans.”

His plan has created plenty of controversy already; Rieder receives “nasty comments” online, and has raised the ire of climate change skeptics such as Marc Morano of Climate Depot.

“The warmists have now graduated from regulating our light bulbs, coal plants and SUVs to regulating our family size,” said Morano. “Let’s keep ‘global warming’ out of the bedroom!”

As radical as Rieder’s proposals may sound, there are those among the climate change activists who are calling for even more drastic measures.

According to the Sierra Club: “Childbearing [should be] a punishable crime against society, unless the parents hold a government license.”

Even more extreme is the stance of the Voluntary Human Extinction Movement, whose members maintain that “voluntary human extinction is the humanitarian alternative to human disasters,” and that humans should commit “species suicide” to save the environment.

The hidden agenda is no longer hidden

And so it appears that the gloves are now off, as the global elites have begun to go public with their depopulation plans.

These self-appointed saviors apparently envision a world in which they alone will enjoy the benefits of a reduced population, while the rabble are encouraged – or outright coerced – into non-reproduction.

Who gave them the power to make these decisions?

The answer is that we did – or at least many of us did – by allowing ourselves to be duped by fearmongers like Al Gore and others bent on selling the global warming myth so that the elite could take over the planet and fashion it into something that serves their interests.

We need to understand that the issue is not climate change at all; the real agenda is creating a world where you and I and our children’s children will no longer be allowed to exist. Our very survival is now being threatened by the global elite – if we let them carry out their plans.