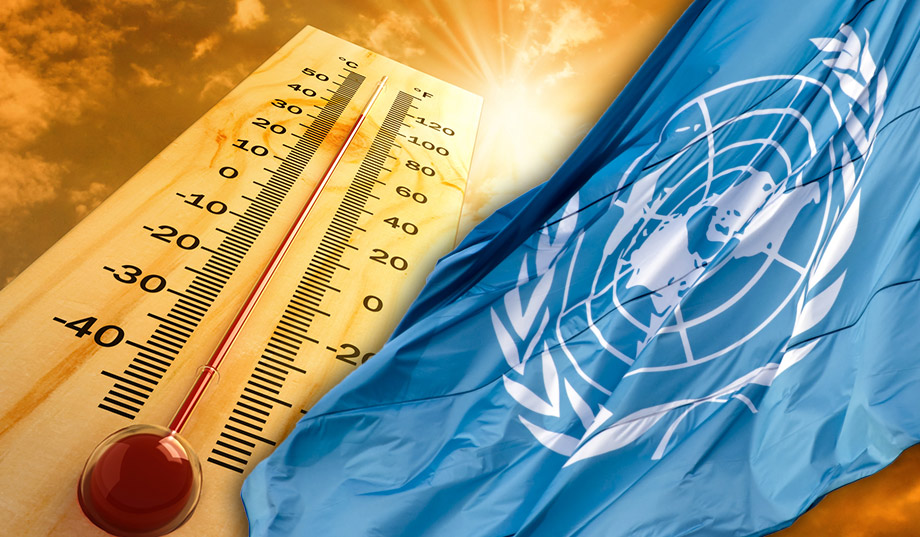 COP 21 or the 2015 Paris Climate Conference that is scheduled to take place in Paris on November 30, 2015, will be unlike other UN climate summits or climate conferences in the past. COP 21 has a scarily grandiose objective: in their own words “to achieve a legally binding and universal agreement on climate … for the first time in over 20 years of UN negotiations.” If they achieve their aim, we would be faced with the horrifying prospect that the mythology of AGW (anthropogenic global warming or manmade global warming) would become entrenched in law, thus solidifying it as fact in the minds of many. It would be a giant step towards Global Governance or a One World Government with a worldwide carbon tax, for so long now the wet dream of the New World Order manipulators.

COP 21: Trying to Make the AGW Fallacy Into Law

The objective sought at COP 21 has been a long time coming. Obama revealed how important this was to some factions of the NWO when he stated that his “definition of leadership would be leading on climate change, an international accord that potentially we’ll get in Paris,” in response to the assertion put forth by the interviewer that Putin was challenging Obama’s leadership. If worldwide climate change laws are just as important to the NWO as controlling Syria, it gives you some idea of what is at stake here. Some have also suggested that the upcoming COP 21 was the reason former Aussie PM Tony Abbott lost leadership of his party (Abbot was strongly opposed to the idea of AGW) and replaced with pro-AGW and Goldman Sachs man, Malcolm Turnbull.

Normally, the annual COP (Conference of Parties) meets to review the implementation of the “Rio Convention,” drawn up at the Rio Earth Summit in 1992. It includes the UNFCCC (UN Framework on Climate Change) which entered into force in 1994 and has 195 signatory parties. This time, COP 21 will be going all out with extra gusto to create a new set of planetary laws to ensure every nation must combat climate change, with the purported aim “of keeping global warming below 2°C.”

A Few Problems for COP 21: Antarctica, Greenland and the Arctic Aren’t Cooperating

Unfortunately for the global governance enthusiasts, who seek universal “consensus” among all nations and parts of the Earth, there are many factions that are not cooperating – include a couple of massive areas of ice, and a continent. Very recent data reports from multiple sources (NASA and AGU/BAS [American Geophysical Union and British Antarctic Survey]) are suggesting that not only is Antarctica not succumbing to global warming, but just the reverse – it is freezing over. Here are some quotes from the studies; this first one is from the NASA study:

A new NASA study says that an increase in Antarctic snow accumulation that began 10,000 years ago is currently adding enough ice to the continent to outweigh the increased losses from its thinning glaciers … According to the new analysis of satellite data, the Antarctic ice sheet showed a net gain of 112 billion tons of ice a year from 1992 to 2001. That net gain slowed to 82 billion tons of ice per year between 2003 and 2008.

The net gain may have slowed, but that is still a gigantic amount of ice to gain. This next one is from the joint AGU/BAS study:

Since the record is 300 years long, we can see that the amount of snow that has been accumulating in this region since the 1990s is the highest we have seen in the last 300 years … Annual snow accumulation increased in the early 20th century, rising 30 percent between 1900 and 2010.

Meanwhile, around the North Pole, the same thing seems to be happening. Tony Heller of Steven Goddard reports that

Ice growth in Greenland continues at record levels this fall. The surface of Greenland has gained 200 billion tons of snow and ice in the last eight weeks. This has been accompanied by record cold weather approaching -60C” and also that “Arctic sea ice extent is at a ten year high for the date, after record growth. COP 21: Capitalizing on fear mongering like has always been done?

Maybe the NWO controllers should have made anthropogenic global cooling their crusade, and fooled people into some other kind of tax based on plummeting temperatures … oh, wait a minute, they did (see image above)! I guess it’s too late to reverse course now … although with the vague term climate change anything is possible.

In what is very interesting timing for France, one of their leading meteorologists, Philippe Verdier, recently published a book Climat Investigation (Climate Investigation), where he accuses climate change scientists and the IPCC (Intergovernmental Panel on Climate Change) of manipulating the data. As Verdier states in this video, “My book ‘Climate Investigation’ was published one month ago. It got me banned from the air waves,” and according to RT also said that he had put himself “in the path of COP 21, which is a bulldozer, and this is the result.”

Consensus? Far From It: Look at All the Dissenters in the Run Up to COP 21

The more you look, the more you find dissenters from all over the Earth who are speaking out against the highly politicized AGW climate change movement as COP 21 approaches. Unfortunately for the Rothschilds, Rockefellers, the UN, the IPCC and all their stooges and mouthpieces, the UN has failed to achieve consensus (one of its favorite buzzwords) on climate change, and the science is settled only in one way – showing that the world is not really warming at all, and that man’s contribution to climate change is insignificant. There are a plethora of dissenting individuals, scientists and organizations with massive research behind them showing that AGW is a political movement to usher in global governance:

– NIPCC: The Nongovernmental International Panel on Climate Change is an international panel of nongovernment scientists and scholars who have come together to understand the causes and consequences of climate change. They published the 2009 report Climate Change Reconsidered which they claim “is the most comprehensive critique of the IPCC’s positions ever published. It lists 35 contributors and reviewers from 14 countries and presents in an appendix the names of 31,478 American scientists who have signed a petition saying ‘there is no convincing scientific evidence that human release of carbon dioxide, methane, or other greenhouse gases is causing or will, in the foreseeable future, cause catastrophic heating of the Earth’s atmosphere and disruption of the Earth’s climate’.”;

– 1000+ dissenting scientists: as of 2010, there were more than 1000 international scientists (up from 700) who came out and publicly went on the record to state that AGW is a flawed model. The list includes many current and former UN IPCC scientists, who have now turned against the UN IPCC;

– This list of scientists who oppose the mainstream scientific assessment of global warming;

– John Casey: this former White House space program advisor believes in global cooling, and that the Earth is on the brink of a major ice age;

– Christopher Monckton: this former advisor to the UK Prime Minister has done a great job exposing the fear mongering and junk science behind the global warming movement, which is really a cover for implementing cap-and-trade (favoring big corporations) and global government. He quotes how Al Gore admitting his own sensationalism: “I believe it’s appropriate to have an over-representation of factual presentations of how dangerous it is”;

– Ian Plimer: this Australian geologist humorously calls the AGW movement a “load of hot air” and has shown how the data measurements for climate change have been totally rigged. He also points out how environmentalism has replaced organized religion as a matter of personal faith;

– Russia: Many have referenced Russian President Putin’s disdain for the idea of AGW, and have reported that he believes that “there is no global warming, that this is a fraud to restrain the industrial development of several countries, including Russia,” and that maybe global warming will mean Russians “spend less on fur coats.”

COP 21: Remember How It All Started …

COP 21 is the culmination of a very long-term plan, hatched by the NWO manipulators decades ago, and revealed in the documents like the Report from Iron Mountain and the Club of Rome. It is also important to note that COP 21 and AGW are the result of a Rothschild-Rockefeller attempt to create a One World Government. George Hunt was the whistleblower who was there at the start. He overheard and captured the actual voices of the Rothschilds, the Rockefellers and their top agents as the laid out their deceitful schemes, some of which you can hear in this video!

As William Jasper pointed out in The New American, the official draft text of the climate treaty to be agreed upon at COP 21 includes provisions for the establishment of an “International Tribunal of Climate Justice” (see pg. 19 of 34) – think World Court – which, alongside a world carbon tax, is yet another stepping stone to the New World Order. Make no mistake about it; there are some serious things planned at COP 21 which will affect every human being on the planet. It remains to be seen whether the people attending the conference will vote humanity further towards a One World Government based on carbon deception.