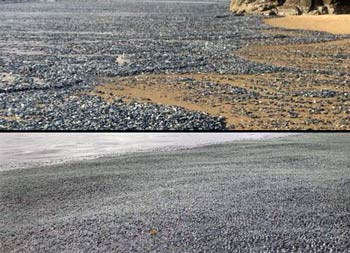 National Geographic, Apr 20, 2015 (emphasis added): Billions of Blue Jellyfish Wash Up on American Beaches… In recent weeks, about a billion jellyfish-like “purple sailors” have washed up on West Coast beaches… The jellies started washing up on Oregon and Washington State beaches four to six weeks ago… Then they started showing up in California… Photo: Endless — Dead Velella stretch as far as the eye can see… perhaps as many as a billion, experts say

KOMO, Apr 17, 2015: There’s an unusual sea creature being pushed ashore from the Baja to the Bering Sea… beachcombers are finding something blue that’s out of ordinary. “This is something that doesn’t happen here very often.” For almost a month now a jellyfish like creature called the velella velella has been washing up by the millions… [Witnesses] have never seen anything like it.

KSBW, Apr 15, 2015: Billions of creatures wash ashore in California — Piles of sea animals have been washing ashore of late… These creatures are all over right now… changing the landscape of local beaches… [Biologist Steve Haddock] says the death totals are staggering… “It’s got to be billions.” He says the animals are blowing ashore as far north as Washington and as far south as Pismo Beach [Calif.].

The Weather Channel, Apr 16, 2015: Billions of Mysterious Creatures on Beach — Billions of Velella Velella jellyfish are washing on shore along the West Coast… Strong winds and above average sea surface temperatures are killing off this unusual animal in large numbers.

Malibu Times, Apr 28, 2015: Blue Jellyfish Taking Over Malibu Beaches — An influx of visitors have taken over the shores of Malibu [and] have caused concern among residents.

Beach Connection, Apr 12, 2015: Last week, the bulk of the Oregon coast was hit by a large number of Purple Sails – a kind of small jellyfish… Now, however, the inundation has continued unabated and the little creatures are literally covering all of the Oregon coast. It is now hard to step on any part of a beach without stepping on them… “They haven’t really stopped coming in,” [Charlie Plybon, a Newport resident] said. “They’ve been coming in and coming in since I talked to you last.”… They seemed to disappear for several years between 2007 and 2014. This time, however, seems one of the larger inundations in more than a decade.

The Oregonian, Apr 19, 2015: What a weekend it’s been at the beaches in northern Oregon… [Velella velellas] washed up on Oregon beaches by the millions recently, capturing national attention… The buzz was a little mysterious to Keith Chandler, longtime manager of the aquarium, because the smallish marine life had been coming ashore for a month… Something similar happened last summer.