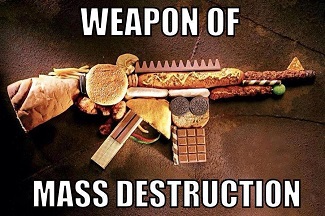 This message especially goes out to those ‘not in the know.’ For the well-being of you, your family and friends it is essential that you pay heed to the following information. There is a war on our health. Promulgated within an organization of certain individuals in high places there is a secret agenda to systematically destroy the health of a significant number of the world’s human population.

To counter this planned agenda it is necessary to educate yourself on what’s going on: Make informed choices on your health while educating others to do the same… Before I get into that, first, here is some background.

The Fabian Societywas named after Fabius Maximus a Roman dictator/general. His claim to fame was his military strategy. Instead of fighting battles where winning or losing would be the outcome he employed a tactic whereby he had his army weaken the enemy over a long time period. Then, with the enemy so weakened, his army would just step in and take over with little resistance.

-This is an analogy for what’s going on with the ruling elite’s health agenda: After systematically destroying the health of a significant number of the world’s human population, those still alive will be so weakened having little resistance to offer, the ruling elite will then take over and do as they wish for their planned New World Order global fascist dictatorship.