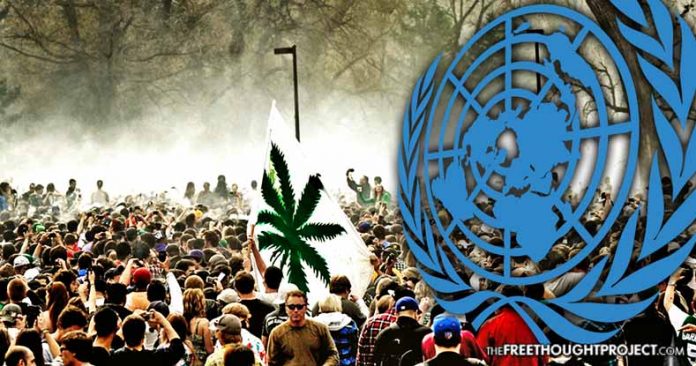 One year after ignorantly doubling down on the drug war, the UN is now calling to end prohibition. The drug war is crumbling.

A little-noticed public statement issued by the United Nations last week contains a dramatic shift in thinking on the issue of “illicit” substance use. After recommitting to the failed idea of prohibition just last year, the UN is now calling for the worldwide decriminalization of drug use and possession.

The statement, put out by the World Health Organization (WHO) as the U.S. is in the midst of a nonsensical debate over health care, calls for “ending discrimination in health care settings.” The WHO calls on states to end discrimination against “marginalized and stigmatized populations” in a variety of ways, and includes a blunt and rather shocking statement on the drug war.

“We, the signatory United Nations entities, call upon all stakeholders to join us in committing to taking targeted, coordinated, time-bound, multisectoral actions in the following areas. Supporting States to put in place guarantees against discrimination in law, policies, and regulations by… Reviewing and repealing punitive laws that have been proven to have negative health outcomes and that counter established public health evidence. These include laws that criminalize or otherwise prohibit…drug use or possession of drugs for personal use.”

This is an admission that the problem of drug abuse is a public health issue, not a criminal justice issue. Locking people in cages for the victimless behavior of ingesting substances arbitrarily deemed illegal by the State does nothing to reduce drug use or supply, as evidenced by the utter failure of the War on Drugs.

Prohibition has also denied people the miraculous healing powers of cannabis. For decades medical research of cannabis was stifled by a drug war borne of racism and political suppression. But research has increased exponentially in recent years as governments around the world take steps to decriminalize this medicinal plant, notably among states in the U.S.

With this awakening have come amazing stories of healing through cannabis, such as stopping seizures in children with debilitating epilepsy, treating post-traumatic stress disorder (PTSD) in veterans where all other treatments have failed, and healing a host of other illnesses without the dangerous side-effects of pharmaceutical drugs.