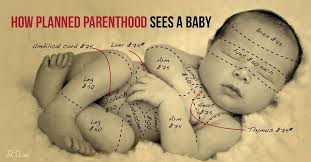 Playing the part of the benevolent nonprofit, Planned Parenthood seems to get a kick of out pretending as though it exists to help women stay healthy and make the best reproductive decisions for their lives. However, a closer look into the group’s financials reveals that it’s a nearly $1 billion-a-year business that profits immensely from murdering the unborn babies of women.

According to data compiled by the American Center for Law and Justice (ACLJ), more than half of Planned Parenthood’s annual revenues come from abortion services. The group rakes in $164 million annually from this segment of its business, not to mention the funds it receives from general clinic income, private donations and taxpayer disbursements.

When you add it all up, Planned Parenthood brings in almost $1 billion a year for suctioning innocent babies out of their mothers’ wombs, murdering them, and selling the remains to biotech companies for “research” purposes.

“[D]o not be deterred by Planned Parenthood protestations of concern for women: abortion is a big, dirty, money-making business,” writes Tami Jackson for Barbwire.

Abortion, not mammograms or “women’s health”, is why Planned Parenthoood exists

You’ve probably heard the claims that Planned Parenthood’s abortion services represent just a small portion of its overall business. Three percent is what many media outlets are reporting with regards to where abortion falls under Planned Parenthood’s distribution of “reproductive health” services.

However, this number is highly misleading as abortion is the bread and butter of Planned Parenthood’s entire existence. The organization wasn’t started to provide mammograms, contrary to White House claims — Planned Parenthood doesn’t even offer breast cancer screenings — nor was it launched with the intent of helping women through pregnancy.

“The abortion industry, led by Planned Parenthood, is about committing abortion,” explains the ACLJ. “Sure they provide some other services, but when your only self-sustaining revenue source is one thing and you are responsible for 40 percent of that one thing in the entire nation, that is what you are about. Planned Parenthood is about abortion.”

If it weren’t for government funding from taxpayers, Planned Parenthood would likely be run out of business

The truth is that Planned Parenthood probably wouldn’t even exist if it weren’t for government subsidies. Government funding, which comes directly from taxpayers, accounts for nearly half of Planned Parenthood’s annual revenues. A sizable percentage of this amount comes as a result of “free” birth control initiatives at the federal level.

“Over 46 percent of its $1 billion total annual revenue comes from the government — from our tax dollars,” explains ACLJ. “According to Planned Parenthood, of this taxpayer funding, about $70 million comes through the federal government’s Title X funding — providing free birth control (including to minors).

Low-income and minority communities are where Planned Parenthood seems to thrive most. It’s within these segments of society where folks most utilize government birth control services, which end up sending large amounts of cash straight into the coffers of Planned Parenthood.

“If any other non-profit that received hundreds of millions of taxpayer dollars were caught doing half the things that Planned Parenthood is caught doing they would be run out of business,” says the ACLJ, drawing attention to the Center for Medical Progress’s (CMP) undercover video series and other evidence showing criminal activity at Planned Parenthood.