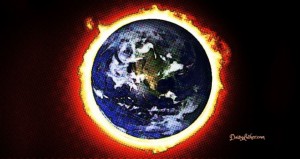 Remember how a couple of days ago the German government advised its citizens to start stockpiling food and water? Well, today they have announced that they are considering reintroducing conscription…the draft, to ‘help with any future disaster’.

And Germany isn’t alone. There are increasing hints in countries around the world that something big is on its way…and it won’t be pretty.

Do they know something we don’t?

The German government will discuss their emergency plans Wednesday. The BBC reports:

Germany may reintroduce a form of national service for civilians to help the army deal with a future disaster.

The role of civilians is part of a new civil defence strategy to be discussed by the government on Wednesday.

Since the strategy was leaked to the media there has been intense debate about stockpiling food and water.

In a crisis civilians might be obliged to help direct traffic or provide fuel and accommodation for the military.

Germany only scrapped conscription in 2011. However, it was not removed from the country’s constitution, which means it would be incredibly simple to reinstate.

As I wrote about on Monday, the German government is urging citizens to get prepared – and quickly.

The German Federal Office of Civil Protection and Disaster Assistance (BBK) put the following list on their website as a guide:

This it states is a survival list that should last an individual for two weeks in the event of a national emergency.

“People have become less and less prepared for an emergency”.

…We’ve got accustomed – not least because of the internet – to having everything available at all times,”

In addition to the food list he suggested medicines, a flashlight, spare batteries, and candles. Hardly comprehensive, but it’s a start.

Last summer there were two alarming warnings urging Americans to get prepared.

First, in May, President Obama said:

One of the things that we have learned over the course of the last seven and a half years is that government plays a vital role, but it is every citizen’s responsibility to be prepared for a disaster. And that means taking proactive steps, like having an evacuation plan, having a fully stocked disaster supply kit. If your local authorities ask you to evacuate, you have to do it. Don’t wait.

This was followed by DC Homeland Security Director Christopher Geldart issuing a warning to residents:

Everyone needs to dust off their evacuation plans, understanding Metro isn’t a reliable option over the next year.

“When we put more vehicles on the road– like an emergency happening in the middle of the day and everybody leaving at the same time– that’s going to cause backup and it’s going to take people a good time to get home,” Geldart said. “It will take longer– much longer– than they are used to. So what we’re telling folks is, you need to have a plan with your family.”

And that’s not all. The hints are everywhere that war could be on the horizon.

The rest of the world hasn’t exactly been calm and peaceful, either.

In general, Europe doesn’t have the prepping mentality that exists on this side of the pond but it looks like they are starting to consider that the government may not be in a position to help its citizens.

The UK hasn’t come right out and said that Brits should start stockpiling food and water, but the government there has produced a Preparing for Emergencies booklet that few people even know exists. It’s ‘What You Can do’ page lists essential items that should be to hand in the event of an emergency and advises that enough food, water, and medication should be available to last a few days. The booklet also gives advice on various emergency situations and how to deal with them.

The pace of world events is picking up…yesterday it was announced that Turkey had evacuated an entire town as it intends to engage in across border action with Islamic State in Syria.

North Korea has fired a missile from a submarine in violation of International law.

Every day, something worrying occurs on the international stage. Worrying developments that threaten stability across the globe.

Make sure you have:

There’s something very suspicious about all of these unsettling events happening in such close succession.

We shouldn’t be waiting for governments to tell us to prepare. We should be doing it of our own volition. We should be taking responsibility for the safety of our families.

And we should be doing it now.