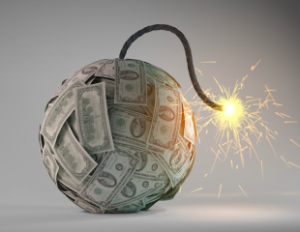 The world has been captivated by a continuous stream of disturbing and shocking headlines. Seemingly every other day, different terrorist attacks, police assassinations or political stunts ignite the public into an emotional frenzy. But as fear shuts down critical thinking, banks that control Europe’s financial system are entering a death spiral. Despite what establishment media narratives push, the most dangerous threat to our way of life isn’t a religious ideology or political divide.

The real risk is a contagion that is undermining the core of the financial system, and the interconnectedness of the globalized economy we live in makes containing the problem nearly impossible. Concerns that used to be isolated to the failing state of Greece have now engulfed the rest of the PIIGS nations. If these dominoes continue to fall in Europe, the momentum could carry the destruction to every corner of the globe.

Italian banks are the latest on the chopping block in the wake of Brexit. For years, they have been acknowledged as a weak link in the economic chain, but they now face stress tests that could expose the scope of their internal problems. The oldest bank in the world, Monte Dei Paschi, is at the center of the controversy, with an expected shortfall of over 3 billion euros.

Other big names, like UniCredit, are in equally bad shape. Wells Fargo recently found that nearly 15% of all loans held by Italian banks could be at risk of default, a staggering figure to attempt to unwind. Further, England’s departure from the E.U. has sparked questions over the future of the euro — and Italy could be the catalyst for an all out breakdown of confidence. If panic begins to grip the Italian people, things could escalate quickly, potentially triggering bank runs.

A perfect storm of slow or zero Italian economic growth, low interest rates and politically connected, often corrupt, lending have combined to create a situation where the Italian financial system is in need of a large rescue.

The head of the European Central Bank, Mario Draghi, wasted no time reassuring the markets and downplaying the significance of the hurdles ahead. Draghi is a former governor to the Bank of Italy, and he recently came out in full support of a ‘public backstop’ for the toxic loans. The public backstop suggested is the political term for shafting the taxpayer. Governments and banks alike have no problem shifting the responsibility of the debt onto the citizens, all while chastising them about how excessive their entitlement programs are and framing the greed of everyday people as the root of the issue. For the elites, it is much easier to use austerity measures, inflation, and shaming of the public to deflect blame from themselves than it is to take ownership for their own corrupt actions.