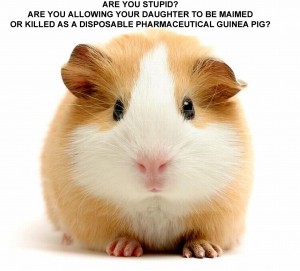 The American Cancer Society issued a press release recently stating that they were agreeing with the U.S. Center for Disease Control’s (CDC) recommendation to now start vaccinating boys as well as girls with the Gardasil vaccine, and that Gardasil vaccines can begin as young as age 9.

Noticeably absent from the press release was any warnings on Gardasil risks and side effects, or any mention of how other countries around the world are now investigating the vaccine due to the amount of injuries being reported. Japan and other nations have actually withdrawn their recommendation of the HPV vaccine.

Because the manufacturers of vaccines are not immune from liabilities due to the harm their vaccines cause in these countries, in contrast to the United States where one cannot sue a vaccine manufacturer, many are taking legal actions against HPV manufacturers. You will read none of this in U.S. mainstream media.

Another source of alternative views on the Gardasil vaccine that is routinely censored in the U.S. media are the doctors themselves who are opposed to the CDC recommendations for the HPV vaccine.

What are the Risks and Side Effects for the HPV Vaccine?

Dr. Deirdre Little, a pediatrician in Australia, was the first one to sound the alarm over the HPV vaccine causing premature menopause when she observed it in one of her 16 year old patients in 2012. Dr. Little published a paper in the British Medical Journal warning that the premature menopause of a healthy 16-year-old girl may be linked to the Gardasil vaccination.

Now, another study has published in the American Journal of Reproductive Immunology documenting three more cases of “Primary Ovarian Failure,” where three young girls stopped having periods and showed signs of menopause. The study confirms Dr. Little’s experience, and was conducted in Israel and Italy. The authors concluded:

We documented here the evidence of the potential of the HPV vaccine to trigger a life-disabling autoimmune condition. The increasing number of similar reports of post HPV vaccine-linked autoimmunity and the uncertainty of long-term clinical benefits of HPV vaccination are a matter of public health that warrants further rigorous inquiry.

A study last year (2015) linking the HPV vaccine to POTS (postural orthostatic tachycardia syndrome) was published in the very pro-vaccine journal Vaccine. From the study abstract:

35 women aged 23.3±7.1 years participated. Twenty-five had a high level of physical activity before vaccination and irregular periods were reported by all patients not on treatment with oral contraception. Serum bilirubin was below the lower detection limit in 17 patients. Twenty-one of the referred patients fulfilled the criteria for a diagnosis of POTS (60%, 95%CI 43-77%). All patients had orthostatic intolerance, 94% nausea, 82% chronic headache, 82% fatigue, 77% cognitive dysfunction, 72% segmental dystonia, 68% neuropathic pain.

In a population referred for symptoms of orthostatic intolerance and other symptoms consistent with autonomic dysfunction that began in close temporal association with a quadrivalent HPV vaccination, we identified a 60% prevalence of POTS. Further work is urgently needed to elucidate the potential for a causal link between the vaccine and circulatory abnormalities and to establish targeted treatment options for the affected patients.

None of the mainstream media sources covered this study.

Here is some more information the public needs to know about Gardasil that they will not read in the mainstream media.

Dr. Julie Gerberding of Merck was Head of the CDC When Gardasil Was Approved

Julie Gerberding was in charge of the CDC from 2002 to 2009, which includes the years the FDA approved Gardasil as a vaccine. Soon after she took over the CDC, she reportedly completely overhauled the agency’s organizational structure, and many of the CDC’s senior scientists and leaders either left or announced plans to leave. Some have claimed that almost all of the replacements Julie Gerberding appointed had ties to the vaccine industry.

Gerberding resigned from the CDC on January 20, 2009, and is now the president of Merck’s Vaccine division, a $5 billion dollar a year operation, and the supplier of the largest number of vaccines the CDC recommends.

The U.S. Government Earns Royalties from the Sale of Gardasil

In November 2010, Dr. Eric Suba submitted a Freedom of Information Request to the Office of Government Information Services to discover the amount of money the U.S government earns from Merck’s sale of Gardasil. But apparently the government is immune from revealing those figures.

Gardasil Manufacturer Spends Millions on Doctors to Promote Their Products

Jeffry John Aufderheide of Vactruth.org revealed that Merck, the manufacturer of Gardasil, pays out over $18 million in speaking fees to doctors to promote their drugs, including Gardasil.

So can we trust the American Cancer Society’s new recommendations on the Gardasil vaccine, and start injecting boys also, and all children beginning at age 9?