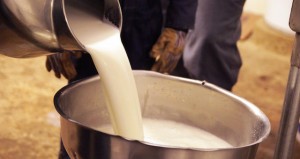 In 1948 Michigan became the first state to require all milk sold to consumers to first be pasteurized, thus beginning the war on raw milk. The national effort to prevent people from obtaining raw milk has become so absurd that state and local governments around the country are willing to sick S.W.A.T teams on U.S. citizens to protect us from the potential harm in consuming raw milk which has been a dietary staple for generations.

The ostensible premise for such militant enforcement of food law is of course public safety, as authorities say that certain manufacturing processes do not prevent the bacterial contamination of milk, and the government now claims that raw milk is too dangerous for human consumption even though it is entirely possible to produce it without contaminating it.

Advocates of the consumption and free sale of raw milk describe pasteurization as a process that destroys the real nutritional benefits of milk in an effort to prevent the risk of contamination.

Early life consumption of raw cow’s milk reduced the risk of manifest respiratory infections and fever by about 30%.

Raw milk also aids in the prevention of allergic diseases.