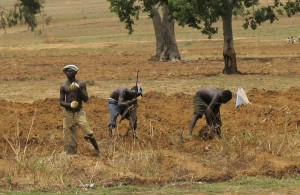 GMOs are perhaps one of the sacred cow topics of anti-neoliberal, anti-globalization activist discourse, they are as confusingly scientific as vaccines and carry with them just as fervent criticism and defense.

For the most part, some of the suggested benefits of GMOs have fallen flat: Corporate claims that genetically modified crops provide an easy solution to the problem of world hunger have proven to be unsubstantiated, and the only positive results that GM crops tend to produce directly are those related to the wealth/poverty gap. Problematically, the biotech corporations that have created GM crops find refuge in the Global South — or so-called Third World — where corrupt governments appear happy to receive international money in exchange for turning their fields and populations into laboratories.

Since the beginning of the summer, the government of Nigeria has been quickly increasing the reach of companies like Monsanto, issuing permits that allow the establishment of GM crops in the country. Grassroots resistance has been immediate, and Nigerians are openly expressing their discontent at this decision that has the ability to directly impact local and national food security and sovereignty. It’s no wonder that the world, particularly among food security and anti-neoliberal activists, is watching Nigeria.

GMO crops are a wonder. Developed in labs by scientists who nominally have good intentions, they are then copyrighted and patented, allowing the companies that employ these scientists to sue individual farmers for reusing seed, even when accidental.

If this were not startling enough, GM crops are often tied to development and sold to the Third World as a clear path to food sovereignty.