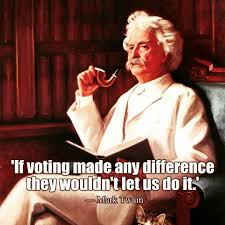 Don’t be fooled into thinking that the only road to reform is through the ballot box. Whether you vote or don’t vote doesn’t really matter. What matters is what else you’re doing to push back against government incompetence, abuse, corruption, graft, fraud and cronyism. After all, argues John W. Whitehead, there is more to citizenship than the act of voting for someone who, once elected, will march in lockstep with the dictates of the powers-that-be.