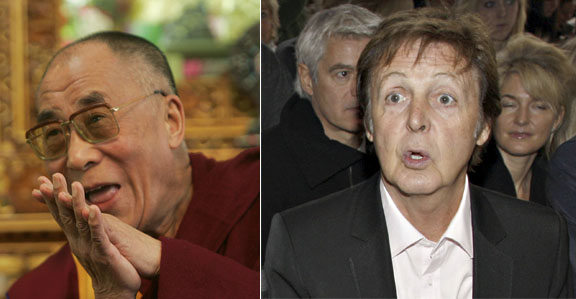 Paul McCartney has written a personal letter to His Holiness The Dalai Lama, the spiritual and political leader of Tibetan Buddhism, urging him not to eat meat. Buddhists believe in reincarnation and in compassion for all living beings. One of the five precepts of Buddhism is “do not kill,” which is explained “One must not deliberately kill any living creatures, either by committing the act oneself, instructing others to kill, or approving of or participating in act of killing.” Buddhism does allow for personal choice and exceptions when it comes to the precepts, and they are not set in stone, but many Buddhists interpret that precept as a call to vegetarianism.

The Dalai Lama, however, continues to eat meat at the insistence of his doctors. Paul McCartney told him that they’re wrong and he doesn’t need meat, which inevitably causes suffering:

The Beatles legend wrote to the spiritual leader to point out that meat-eaters contribute to the suffering of animals, contradicting his statement that Buddhists “believe in not causing suffering to any sentient beings”.

And the Hey Jude hitmaker even disagreed when the Dalai Lama insisted he ate meat for health reasons.

In an interview with Prospect magazine, MCCartney says, “I found out he was not a vegetarian, so I wrote to him saying ‘Forgive me for pointing this out, but if you eat animals then there is some suffering somewhere along the line’.

“He replied saying that his doctors had told him he needed it, so I wrote back saying they were wrong.”