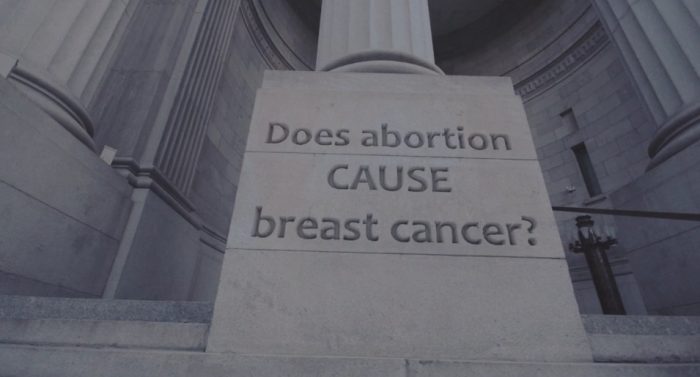 Experts interviewed in the controversial film, “Hush: the Documentary,” which investigates the effects of abortion on women, claim that women aren’t being told the truth about the link between abortion and breast cancer, despite studies that show the claim to be true.

Pro-choice film director Punam Kumar Gill went out of her way to speak with experts on both sides of the debate. “Of all the contested health care risks around abortion, the abortion breast cancer link was especially troubling to me,” she states. According to Gill, at the time the film was produced, there were only five states that required women to be told that there is an increased risk of breast cancer from abortion.

In her team’s attempt to hear all sides, Gill spoke with former abortionist David Grimes, described by her as a “renowned expert” on abortion in the film. Grimes denied a higher risk of breast cancer for women who have had abortions, comparing claims to the contrary to “an old dog that they keep on flogging.” By “they” he means pro-life experts who have published their own studies.

Grimes then claimed that (in his words) the “small group” that “holds these views” tend to “not be physicians” and not “understand what a woman goes through.” He then disdainfully claimed that the “common theme” among these experts is “religiosity.”

But Grimes apparently didn’t do his homework before making those remarks; as the film also showed, there are several highly credentialed experts who believe that an abortion-breast cancer link is evident.

One of those experts is Dr. Joel Brind, a professor of human biology and endocrinology who has studied the topic extensively. Dr. Brind acknowledged that it is his belief that abortion is not good for women or children, and that although women legally have a choice to have an abortion, the choice should be an informed one.

In his research, Brind reviewed 23 studies (a meta-analysis) and, as the film points out, found a “30 percent increased risk of breast cancer for women with abortion histories.” Dr. Brind, along with three other researchers, published these findings in the Journal of Epidemiology and Community Health in 1996.

Although the group of authors called for additional research on the link, the study concluded in part, “The results support the inclusion of induced abortion among significant independent risk factors for breast cancer, regardless of parity or timing of abortion relative to the first term pregnancy.”

But because Dr. Brind holds a pro-life view on abortion, his work has been largely discounted. “The major criticism against him was because he’s pro-life, his science is questionable, and his findings are part of an anti-abortion agenda to scare women,” the Hush film states.

But, what isn’t mentioned by critics of Brind’s conclusions on the abortion-breast cancer link is that one of Brind’s co-researchers is pro-choice. Brind says he was unaware of this fact until after the research was published because when they did the research, “their personal views on the subject of abortion never came up,” he explained.

Brind told Gill that author Vernon M. Chinchilli only disclosed his pro-choice views on abortion after the study was complete. Brind explained, “We did all this work together. Hours and hours of working together in studying the data and comparing notes and talking about it, and you know what? Whether he or I or anyone else in the group was pro-life or pro-choice – it never came up.”

“This is about science. This is about the effect on women and whether or not abortion increases the risk of breast cancer. Period,” he added.