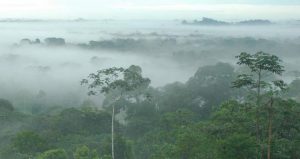 Some 90% of the world’s media is controlled by a mere six corporations. The business model of this industry is dependent on advertising revenue, which means that the content they produce must serve well the bottom lines of advertisers, or more significantly, content cannot be of detriment to the profits of corporate advertisers.

This is the reason why so much of the most important news in our times goes un-noticed and under-reported on, most notably environmental news, for if our attention was sufficiently directed to these issues then we would certainly change our attitudes, priorities and behaviors, potentially harming the income streams of the biggest environmental destroyers on the planet, and the biggest advertisers.

Of particular note is the destruction being done to the Amazon, the ‘lungs of the earth’ as it is known by those who understand the value of life and the need to protect the world’s ecosystems from corporate greed. While indigenous people continue to rally around in support of Amazonian conservation, consumerism in ‘first-world’ parts of the world continues to demand resources that are increasingly being harvested from the most bio-diverse regions of the planet.

After failed conservation efforts, the Ecuadorian government has given up and as of September 2016 the state owned oil company Petroamazonas began drilling for oil in the most pristine and biodiverse region of the entire Amazon, the Yasuní.