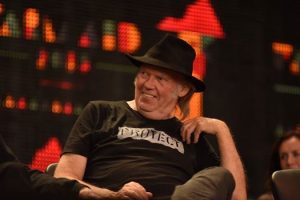 In addition to providing a stunning performance during the 31st Farm Aid concert in Bristow, VA Neil Young stole the show at the press conference before the event began.

While Farm Aid has always been focused on saving family farmers who are in distress, decades of corporate control and monopolization of the American food supply has forced the organization to also move toward helping restart the tradition of family farming and facilitating the good food movement. Obviously, GMOs have become a major issue as a result. So when it came time for Young to speak at the press conference, the godfather of grunge didn’t hold back.

Speaking fresh on the heels of the Bayer/Monsanto merger, Young spoke about the growing concern over corporate control over the food supply and the fact that this merger is a frightening new development in the corporate war on American agriculture. He also took aim at Barack Obama who has supported, facilitated, and pushed corporate control since the day he took office.