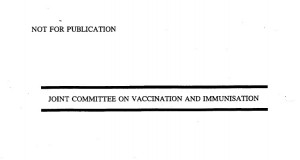 We are reporting these facts because we believe that the public has a right to know what has been going on for years regarding the measles vaccine. We want to alert the people of the world that the CDC is not the only government organization that has known for many years that the MMR combo vaccine (measles, mumps, rubella) and even separate measles vaccinations can cause lifelong neurological disorders.

The facts that we expose today are for informational and educational purposes only. All papers were gained under the Freedom of Information Act.

In 1972, the UK Government had serious concerns about the measles vaccine’s potential to cause vaccine-induced Subacute Sclerosing Panencephalitis (SSPE). SSPE is a degenerative neurological condition, which affects a person’s behaviour, memory and coordination, leading to fits, blindness and eventually death.

Due to these concerns, it was decided that a group called the Expert Group on the Surveillance of SSPE was needed to study the problem in more detail. On February 9, Medical Officer F.C. Stallybrass wrote a request to the UK’s leading professionals asking them to attend a meeting on Monday, March 13, 1972, in room D1001 of the Alexander Fleming House.