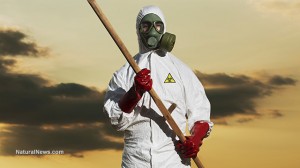 One of the greatest threats to human health today is a violent chemical called glyphosate, which is the main ingredient in the famous weedkiller, Roundup. Glyphosate is sprayed on lawns and gardens all across America, with little regard to what it’s actually doing to the cellular health of men, women and children. The top genetically modified crops in the world, such as corn and soybeans, are genetically modified for a reason – to withstand glyphosate spraying, year after year.

As glyphosate accumulates in the environment, and as it’s introduced into the human body through the food supply, how does it affect the nervous, immune and endocrine systems of humans?

Glyphosate is a violent chemical because it goes to war with the natural functions of the human body, including the endocrine system. The human endocrine system is made up of glands that produce hormones. Hormones are chemical messengers that signal for the balance and homeostasis of important bodily functions. When hormones are disrupted by glyphosate, important functions such as metabolism, behavior and fertility are adversely affected. Glyphosate goes to war with the human ability to reproduce.

The chemical glyphosate also acts much like an antibiotic in the human gut, destroying beneficial microbes that aid in digestion and initiate immune system functions.

Mixed with emulsifiers and surfactants, glyphosate becomes a powerful force, penetrating to kill not only plant cells, but also microbial cells interacting with human cells. This causes genetic damage, changing human DNA in ways that people cannot understand. When pregnant woman are exposed to glyphosate early in gestation, the chemical adversely affects the sexual differentiation stage of embryonic development.

Many birth defects are actually defects caused by glyphosate. Instead of banning it, the U.S. EPA continues to raise the residue limits, allowing more of this chemical to be sprayed on food. The FDA has also increased the threshold for glyphosate on fruit and vegetable crops, as the chemical is paraded as safe – time and time again. It’s chemical warfare, and it’s destroying the developing bodies of the most vulnerable in society – children – while also wreaking havoc on the reproductive systems of women.

Are you going to participate in the chemical violence by purchasing Roundup and other glyphosate containing products at the store?
Will you talk to your local farmers about the dangers associated with their mass spraying of glyphosate?

There is a major difference between genetically modified foods and organics. How will you change your eating habits to defend yourself and your family against the most pervasive poison lurking in the food supply?

How will you purify your drinking water, to deny glyphosate an entryway into your cells?
Will you continue to do as you’re told, allowing men, women and children to be chemically mutilated from the inside out?
How will you take your healthcare into your own hands, finding ways to grow your own food, free of this violent chemical?

As the U.S. government and corporations like Monsanto arrogantly ignore the scientific evidence on glyphosate, they will continue to forcefully lie and poison the people on this planet. Because they are not held accountable for this psychopathic behavior, there is no rule of law – unless a diligent, well informed and courageous public rises to the occasion.