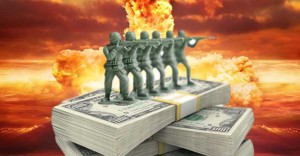 A new Department of Defense Inspector General’s report, released last week, has left Americans stunned at the jaw-dropping lack of accountability and oversight. The glaring report revealed the Pentagon couldn’t account for $6.5 trillion dollars worth of Army general fund transactions and data, according to a report by the Fiscal Times.

The Pentagon, which has been notoriously lax in its accounting practices, has never completed an audit, would reveal how the agency has specifically spent the trillions of dollars allocated for wars, equipment, personnel, housing, healthcare and procurements allotted to them by Congress.

Beginning in 1996 all federal agencies were mandated by law to conduct regular financial audits. However, the Pentagon has NEVER complied with that federal law. In 20 years, it has never accounted for the trillions of dollars in taxpayer funds it has spent, in part because “fudging” the numbers has become standard operating procedure at the Department of Defense, as revealed in a 2013 Reuters investigation by Scot Paltrow.