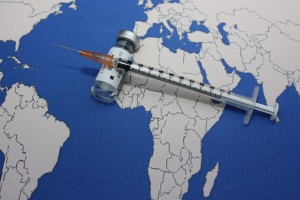 It is a recognized fact that the developing world has been used by the World Health Organization as a vaccine laboratory for decades. This has been proven in data and vaccine studies dating back as far as the 1970s.

With this in mind, we must ask ourselves, is it right to use these vulnerable children in vaccine experiments? A couple of examples are: Group A Streptococcus (GAS) Unlicensed Vaccine Tested In Africa & Asia and Tetanus Vaccines Laced With Hormones Known to Cause Miscarriage “fertility regulating vaccinations.”

In 1994, the WHO decided to put these vaccinations to the test and gave women from developing countries aged between 15 and 45 a tetanus vaccine containing the hCG hormone.

However, an organization known as the Comité Pro Vida de Mexico became suspicious of the protocols surrounding the vaccines and obtained several vials for testing. It was discovered that some of the vials contained human chorionic gonadotropin (hCG), the exact same hormone that the WHO, the UNDP, the UNFPA and the World Bank had been discussing just two years earlier.

Determined to Continue Their Efforts, the WHO Did Not Stop There

Having been caught in their earlier attempts, in 2014, the WHO teamed up with the organization UNICEF and decided that they would attempt their antics yet again, only to have their efforts blighted a short time later by the Kenya Catholic Doctors Association.

Outraged by their disregard for human life, Dr. Wahome Ngare spoke on behalf of the association, making his feelings abundantly clear. Speaking to Huffington Post, he said:

What is immoral and evil is that the tetanus laced with HCG was given as a fertility regulating vaccine without disclosing its contraceptive effect to the girls and mothers.

Many people believe that he is absolutely correct and are asking whether or not the WHO has the right to play God and determine who can and cannot have children.

Gates Foundation, PATH, WHO and UNICEF Test Meningitis A Vaccines in Africa

If we study these results in detail, many are extremely worrying. It is clear that a variety of vaccinations were being given to extremely vulnerable babies, in multiple combinations, from birth.

The results of their study clearly highlighted areas of concern. One of the most alarming was the fact that the study revealed a higher mortality rate in those females vaccinated with the high titre measles vaccine. Despite the WHO removing the vaccination from the schedule in 1992, the high titre Edmonston-Zagreb measles vaccine was once again used to test infants from low income countries in 2004-2007.

Conclusion: WHO Needs to be Investigated for Unethical Research

The WHO has engaged in activities that fall far below the standards of ethical, research and medical conduct that have been established by our health organizations to protect human rights. They should therefore be investigated and prevented from these unchecked activities in the future. If not, each and every one of us will be put at risk when this type of evil is done in the name of medicine.