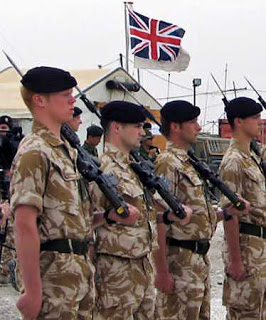 “More than 120 members belonging to the elite regiment are currently in the war-torn country” covertly “dressed in black and flying ISIS flags,” engaged in what’s called Operation Shader – attacking Syrian targets on the pretext of combating ISIS.

Around 800 Royal Marines and 4,000 US counterparts were on standby to intervene on short notice if ordered.

At least part of its current covert ground operation is under US command – so-called “smash” units traveling in pickup trucks able to launch mini-UAVs to scan terrain for targets to attack.

Over 250 UK (and perhaps US) specialists are involved to provide communications support, the Sunday Express explained.

British Defense Secretary Michael Fallon said “(o)ur actions and surveillance capabilities are freeing up other countries to strike in Syria.”