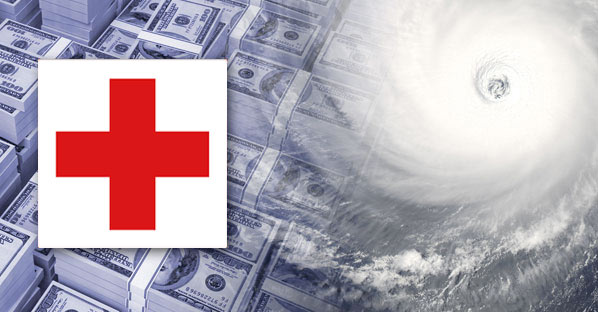 The American Red Cross is a corporate shell devouring millions of dollars in donations.

It not only fails to provide assistance to disaster victims but gets in the way of efforts by smaller, more efficient emergency relief efforts.

A joint investigation conducted by ProPublica and NPR discovered the Red Cross is not interested in its declared mission of “preventing and relieving suffering.” Instead, the organization diverts “assets for public relations purposes” and its distribution of relief supplies, according to one internal report, is “politically driven.”

This public relations agenda, designed to suck up donations from sympathetic Americans, resulted in a fake relief effort during Hurricane Isaac that was “worse than the storm,” according to Jim Dunham, a truck driver. Dunham said Red Cross trucks were dispatched “just to be seen” and were “sent way down on the Gulf with nothing to give.”

Demonstrating the Red Cross is nothing but a PR machine for wholesale theft, the report shows that during Hurricane Sandy “emergency vehicles were taken away from relief work and assigned to serve as backdrops for press conferences, angering disaster responders on the ground,” Justin Elliott, Jesse Eisinger and Laura Sullivan write for ProPublica.

The organization lacked basic supplies and when they were available often went to waste, the report states. Managers misdirected volunteers and, in the aftermath of Sandy, they wandered the streets of New York in search of hurricane victims because the Red Cross did not provide GPS equipment.

Handicapped victims “slept in their wheelchairs for days” because the charity did not provide cots. Sex offenders were “all over including playing in children’s area” because Red Cross staff were ignorant about and didn’t follow procedures, according to the Propublica report.

Despite countless problems and a bureaucratic malaise that resulted in botched disaster response efforts, the organization gave itself a high grade after Sandy. Red Cross Chief Executive Gail McGovern said its relief efforts were “near flawless.”
American Red Cross: Another Corporate and Bankster Fleecing Operation

Considering the fact Obama is the organization’s honorary chairman and its board of governors is dominated by the likes of Goldman Sachs, Merck, Circle One Financial Group, and other large corporations, the fact the Red Cross is merely a front for collecting donations should not come as a surprise.

It is telling as well that the Red Cross was created by congressional charter. It has a government mandate to work in league with the Federal Emergency Management Agency.

As revealed during the Iran-Contra hearings exposing the inner workings of Rex 84, “the real purpose of FEMA is to not only protect the government but to be its principal vehicle for martial law,” writes Allen Roland. “This is why FEMA could not respond immediately to the Hurricane Katrina disaster — humanitarian efforts were no longer part of its job description under the Department of Homeland Security.”

The Red Cross has “totally mastered the science of extracting money from the unthinking masses,” writes John Hamer. “For the most part, they keep it for themselves as do the vast majority of major, household-name charities.”

Hamer provides striking examples of Red Cross fraud: in the wake of the “disastrous San Francisco earthquake in 1989, the Red Cross donated only $10 million of the $50 million that had been raised, and kept the rest” and “following the Oklahoma City bombing in 1995 and the Red River flooding in 1997 many donations were also withheld. Even as far back as the Korean War, the Red Cross was plundering soldiers’ relief packages, the famous ‘Red Cross Parcels’ from home.”

The lesson learned from the Red Cross scam is that only small organizations and local, non-corporate charities are capable of providing honest humanitarian assistance following natural disasters. Large centralized organizations dominated by government, corporations and banks are not interested in helping people. On the contrary, they are designed to loot the public and have unfortunately elicited the help of useful tools like Bruce Springsteen and Heidi Klum to facilitate widespread robbery and perpetuate negligence.