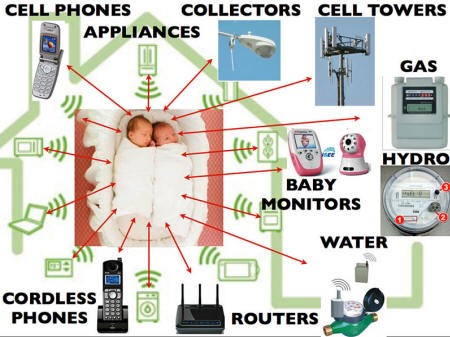 Science is the hallmark of everything—supposedly, except when it’s out to lunch in its hypotheses or when it is downright fraudulent, as is the case with vaccinology in order to protect vested Pharma interests.  Even the U.S. CDC and FDA cover Big Pharma’s derriere when it comes to chanting the mantra “vaccines are safe.”  So much science in the peer review realm is out there published stating totally opposite documented scientific facts, but still U.S. federal health agencies function on the ‘flat earth’ concept regarding human health safety!

Such obstinate scientific posture also prevails in the field of microwave technology regarding EMF/RF/ELF and the various rays emitted by microwaves and their intensities.  The only waves recognized by microwave industry giants and vested interests relative to human exposures are thermal (heat) waves, which were identified back in the 1940s and ‘50s when radar science was in its infancy.  We now live in 2017!  Microwave technology has progressed to the point where it wants 5GHz and above capabilities, but still emphasizes 1940s’ safety principles!  What’s not making sense?