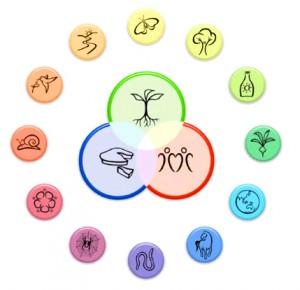 A Brief History of Agriculture

Before we look at what the future might look like we need to understand how we got to where we are before we can move in the appropriate direction for a new and more sustainable future.

Scholars, historians and archaeologists suggest that various forms of farming have existed for over 10,000 years. It was around 9500 BC that the development of crops such as wheat, barley, peas and lentils occurred in the Eastern Mediterranean region (Syria, Jordan, Israel, Lebanon, and Palestinian Territories). In 5500 BC in Southern Mesopotamia, the Sumerians developed possibly the first large scale intensive farming system that included mono cropping -the use of organised labour and widespread irrigation. In 4000 BC, the Mesopotamians were at it again, developing wooden ploughs, possibly the first in history. It took the Assyrian’s another five hundred years to develop irrigation techniques. At the same time, 3500 BC, evidence of the first agriculture in the Americas and Central Amazonia occurred. In 500 BC, the Chinese invented an iron plough that saw the development of row cultivation in cropping.

Agriculture moved into a new era with the development of cash cropping in 1000 AD. This was effectively a move away from subsistence farming. In subsistence agriculture, crops are grown mainly for the producers own benefit and consumption. Cash cropping is where crops are grown specifically for sale and profit. In Illinois 1837, John Deere invented the steel plough and by 1855 Deere had sold over 10,000 ploughs across America. 1895 brought with it the development of refrigeration in the United States and United Kingdom which helped in storing excess food supplies for domestic and commercial uses. By 1944 the ‘Green Revolution’ had spread its wings and was transferring technological research and development initiatives across India and other parts of the globe. This revolution helped increase production in countries like India with the development of higher yielding crop varieties. The ‘green revolution’ introduced intensive irrigation methods and manmade fertilizers and pesticides.

A Summary of Current and previous agricultural production

Looking back over this brief history of agriculture, two key things have occurred in farming. Firstly, there has been a move away from subsistence farming toward cash cropping with an emphasis on increasing yields and output of crop varieties. Secondly, developments in farming techniques and technological improvements over the last century have only been made possible by oil powered machinery and oil based agricultural inputs. These increases in technology and automation have allowed societies to sustain themselves more adequately, allowing populations to increase across all continents. Another trend that is highlighted when looking back at our farming and agriculture history is the predominance of land clearance and intensive farming. There have been some exceptions, many of which are traditional native cultures who saw no need for improved efficiencies as the natural systems and cycles provided enough for a sustained existence. Many of our modern agricultural practices have had a focus on intensive farming that uses heavy machinery, artificial fertilizers and pesticides which eventually depletes soils and the natural environment. The history books are littered with cultures and societies that have collapsed from the exploitation of natural resources. It makes sense that we investigate alternatives to agricultural production going forward. It is estimated that for every calorie of food we eat in the modern industrialised food system it takes 10 calories of fossil fuels to produce that one calorie of food, therefore the price of food and cheap energy are highly correlated. In the early 1900′s 50% of the American workforce was employed in the agricultural sector. Today the number is approximately 2% of the workforce that is engaged in growing food.

The term ‘permaculture’ originated from Australian born author, scientist, teacher and naturalist Bill Mollison and co-developer David Holmgren in the 1970′s. Mollison is known as the ‘father’ of permaculture. He summarises permaculture: “Permaculture (permanent agriculture) as the conscious design and maintenance of agriculturally productive ecosystems which have the diversity, stability and resilience of natural ecosystems.” Permaculture has spread across the globe and there are now millions of people practicing and teaching permaculture principles and design. In his book ‘Permaculture: A Designers Manual’ Mollison states “Permaculture in essence is how nature ultimately designed things in the first place. The idea behind permaculture is to replicate or mimic the natural systems and environments, while using some of the modern techniques of horticulture, architecture and agriculture to enhance and yield edible food supplies.” David Holgren in his book Principles and Pathways Beyond Sustainability elaborates: “Consciously designed landscapes which mimic the patterns and relationships found in nature, while yielding an abundance of food, fibre and energy for provision of local needs,” and, “I see permaculture as the use of systems thinking and design principles that provide the organising framework for implementing the above vision.”

“The Lord God took the man and put him in the Garden of Eden to work it and to take care of it.” – Genesis 2:15

For the most part, we have been following a path of intensive and highly automated agriculture that places pressure on natural systems. Permaculture is more closely linked with how traditional natives farmed and worked with the land. Soil quality is one of the key ingredients for successful farming and agriculture. From the Cuban experience we know that it took the Cubans between 3 to 5 years to get the soil back into a healthy condition after many years of degradation. The use of pesticides, herbicides and artificial fertilisers destroyed the composition of these soils. The methodology that underlies the permaculture movement is that of community and bringing people together to work for the common good. It is a shift away from a non-material profiteering way of life, towards one that encompasses personal responsibility for our actions, taking care of the environment and ensuring that resources are managed sustainability.

Permaculture brings us back to a time when communities, friends and neighbours shared resources. Permaculture is a long way from cheap mass produced food that generate externalities from production. It is about observing nature’s laws and working with nature as opposed to against it. Permaculture is about harnessing what nature has to offer without being greedy and taking more than we need. The collection and storage of water through tanks and the preserving of foods is an example of this philosophy. Realising that what we do today will impact future generations is crucial in paving the way for a sustainable agricultural future. Short sighted profitability must make way for long term sustainability of our land and environment.